Cabinteely want to be ‘the biggest brand in Irish football’ 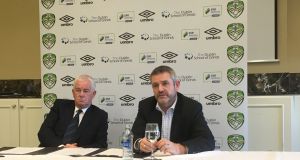 Two years after entering the League of Ireland in what was generally regarded as a bold but risky attempt to protect its youth section, Cabinteely appear to be doubling down on the decision by appointing Pat Devlin as their manager/director of football.

Just fielding a team in the first division is an expensive business but club chairman Larry Bass is looking far beyond that, mentioning at one point the rather remarkable target of becoming “the biggest brand in Irish football”.

That might be some distant dream but Devlin’s arrival, which was announced on Tuesday afternoon in Dún Laoghaire, marks a significant shift in emphasis for a club that had essentially developed into a thriving schoolboy operation over the past few decades.

The former Bray Wanderers manager will manage a first team that will now be semi-pro while overseeing the key underage sides intended to feed into it.

After a difficult couple of seasons working with an essentially amateur senior side managed by Eddie Gormley, there is some money for Devlin to spend and the sort of free hand that, one suspects, he sorely missed during the last couple of seasons with UCD.

Bass talks about the possibility of winning promotion over the next few years and reawakening a tradition for the game in Dún Laoghaire where large crowds once turned out for bigger club games.

The club website recalls a schoolboy cup final in which former senior international Peter Farrell played for a previous incarnation of the club and which attracted around 6,000. That, though, was in 1939 and nobody is talking about anything like those numbers. Still, there is, Bass insists, the potential to dramatically improve on average crowds, estimated by extratime.ie last year, of around 350.

A big part of the ultimate goal appears to involve the building of a coalition of locals sporting interests that might collectively persuade Dún Laoghaire-Rathdown County Council to build a stadium in the borough. It is, Bass says, the only major local authority in the country not to have one and though the schoolboy section benefits from the use of fine public facilities in Kilbogget Park where Seapoint Rugby Club and Foxrock-Cabinteely GAA clubs also play, none has any spectator facilities worth talking about.

“Building a stadium just for football would be madness but I think there’s a lot to be said for the French, Italian Spanish model of football, rugby and other codes sharing facilities built and managed by the local authority,” he says.

Tallaght is name-checked, Dalymount does not even need to be mentioned and Devlin’s unveiling, by some strange coincidence, takes place in a Royal Marine Hotel room with a view of the of the town’s new €37 million library.

The price tag gets mentioned more than once but Devlin insists they are not complaining; more attempting to capitalise, it seems. “You walk inside and it’s a fantastic facility,” he says, “but wouldn’t it be fantastic to have a sporting facility like that.”

“They have been magnificent in the way they have opened their arms to us,” says Bass but Devlin hints at an underlying frustration when he observes, “Stradbrook is Stradbrook. We all know what it is and we are all working to make it better.”

His first priority, though, might be dealing with the internal politics of a club apparently in transition. He mentions the need for there to be just “one club” but his idea of what that should be may, one suspects, be quite some way from that of the average underage coach at a club that fields some 60 teams each week.

Bass talks about there being a “healthy tension” between the two strands (he chairs only the League of Ireland section with a couple of directors serving on boards that are kept deliberately separate so as to provide a measure of protection).

Gormley, it seems, may have found the environment challenging at times but Devlin will have a great deal more influence with the new manager set to appoint the management teams that will run the sides at the key under-19 and under-17 levels (as well, in time, as under-15) something that seems to mark a very significant power shift.

“What we had originally was a junior club with a League of Ireland side bolted on,” says Bass, “but it is one club and what we want to do now is further enhance, protect and develop that so as to make Cabinteely more attractive to junior players. “What we are doing,” he insists, “will enhance everything.”