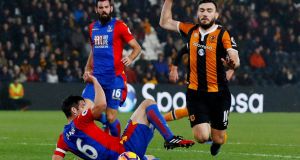 Hull boss Mike Phelan believes it is only a matter of time before video technology is introduced to ensure the correct decisions are made during Premier League matches.

Tigers midfielder Robert Snodgrass posted an apology on Twitter following his dive during Saturday’s 3-3 draw against Crystal Palace at the KCOM Stadium.

The Scotland international, who scored from the resulting penalty, has since been subject a torrent of criticism from fans, pundits and former referees and Phelan feels video evidence will soon be used to adjudicate on such incidents during games.

“I think because of the high demand for the correct decisions and because the rewards are so great now.

“We’ve created this environment now where everything is scrutinised so closely, because it can be, that it’s just a matter of time before things are going to be judged in real time.

“I’m sure it will come into the game at some point.”

Phelan commended Snodgrass for issuing his apology and revealed he had spoken to the winger about the incident.

“Every man and his dog has had his two pennies’ worth picking up on it,” Phelan said.

“In my point of view what Robert did was correct as far as the statement he put out.

“I thought he was pretty thorough, open and honest about it and hopefully we can move on from that.

“I did have a chat with him and I expressed my views — they’ll stay personal — but he’s well aware of his responsibilities.

“He’s very honest, probably too honest sometimes and we look forward to his next performance.”

Former Premier League referee Graham Poll accused Snodgrass of cheating in his column for a national newspaper and has called for retrospective action for simulation after Dele Alli’s dive earned Tottenham a penalty in their recent home win against Swansea.

“I don’t think it will end on Saturday,” Phelan said. “It’s always going to be a controversial issue.

“I felt at the time that the referee dealt with it. He obviously gave what he thought was a penalty.

“Fortunately or unfortunately everything gets replayed a million times and sometimes replays make things look worse than they are.

“For me, it’s forgotten, it’s gone and hopefully Robert can move on from this.”

Phelan has no new injury concerns before the trip to Tottenham and is expected to choose from an unchanged squad.

He must decide whether to recall Hull’s club-record summer signing Ryan Mason to the starting line-up in his first return to White Hart Lane after the former Tottenham midfielder was dropped to the bench at the weekend.

“We’ve got (Jake) Livermore, Mason, (Michael) Dawson and Tom Huddlestone who are all ex-Tottenham, so they’ll all want to play against their former team,” Phelan added.

“From my point of view it’s about picking the right group of players and I’m sure whether Ryan starts, or he comes on as a substitute, he’ll want to perform and show the qualities he learnt at Tottenham and that he’s brought to Hull.”