‘Long-term projects do not exist in football, you have to win immediately,’ City boss said 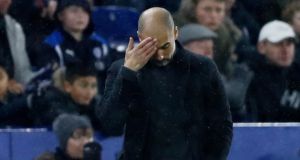 Last week it was the subject of tackling that brought Pep Guardiola up short. This time it was the identity of the former player-turned-pundit who has been urging Manchester City to make more of them.

“Stan Collymore?” the City manager retorted when a Spanish journalist mentioned the source of the suggestion that his side need to toughen up and get more physical. “I have to accept the opinions of former players, the media and fans, because we did not win. But I hope they will give me a little more time. A victory will come.”

Despite that confidence, Guardiola sounded more downbeat than on previous occasions about the security of his job. After waiting so long to land their ideal manager, it was widely assumed City would grant him all the time he needed to make the adjustment to English football. But following Saturday’s 4-2 defeat at Leicester City, Guardiola stressed he is as dependent on results as anyone else.

“Long-term projects do not exist in football,” he said in the runup to Wednesday’s visit of Watford. “You have to win immediately and if you don’t you are in trouble. We are not going to change the way we play, I cannot do something I do not feel, but to win games we have to minimise our mistakes. Ultimately the boss and the chairman are going to decide on my future, my job is to make them feel more confident.”

City have just four wins in their last 15 games in all competitions, but though Guardiola accepts the last month has not been easy, he believes some of the margins of defeat have been narrow. “All I want is for my players to play as they did against Chelsea,” he said. “That was not a long time ago, I saw the game again and we didn’t deserve what happened. We were a yard away from a second goal, we could have gone top of the league and now we are seven points behind.

“We have to cut out some of our mistakes but the main thing in English football is controlling the second ball. Without that you cannot survive. The second goal at Leicester came from a throw in, the second ball was a goal. In many other countries when one guy has the ball at his feet the people know what is going to happen. Here the football is more unpredictable because the ball is in the air more than on the floor. I only needed to see one game to understand English football. Swansea 5 Crystal Palace 4. Nine goals, eight from set pieces. That is English football and I have to adapt.

“All the strikers, like the ones at Watford for example, are good at this kind of thing. They win the duels, and at that moment their strikers are better than our defenders. We have to try to win those situations more often than in the last few games, and we have to change the results, because they are not good enough for Manchester City. We are trying to be a little more aggressive in the tackle, as it happens, it is just not going too well.”