Chelsea willing to sell Oscar to Shanghai for £60 million 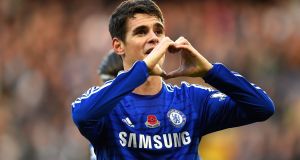 Chelsea are ready to sanction the sale of Oscar to Shanghai SIPG. Photo: Mike Hewitt/Getty Images

Chelsea are ready to sanction the sale of Oscar to Shanghai SIPG after the Chinese Super League club, now managed by André Villas-Boas, formalised their interest and tabled an offer worth up to £60m for the Brazil midfielder.

Oscar had started the first five Premier League games of Antonio Conte’s tenure at Stamford Bridge but has been reduced to a bit-part role in the period since and has played only 36 minutes, encompassing four substitute appearances, of the Premier League leaders’ nine-match winning run. He has recently been suffering from illness and is unlikely to be involved in the squad who confront Sunderland on Wearside on Wednesday as the leaders attempt to extend that sequence to 10 games.

Oscar’s days at Stamford Bridge appear to be all but over after four-and-a-half years at the club during which, in truth, he has only shown flashes of his quality. Villas-Boas has been a long-standing admirer and tried to sign the 25-year-old, then with Internacional, for Tottenham Hotspur in the summer of 2012 only for the Brazilian to opt to move to the Portuguese’s former employers instead.

He has made 99 Premier League starts in the period since but, having grown frustrated on the fringes at Chelsea, is understood to be willing to take up the lucrative new challenge in China. Both Guangzhou Evergrande, coached by another former Chelsea manager in Luiz Felipe Scolari, and Jiangsu Suning, who had made their own interest known last summer, have continued to track Oscar, but Villas-Boas is confident he will secure the player. He would join his compatriots, the £48m Hulk and Elkeson, at Shanghai SIPG.

Chelsea, who had been reluctant to part with the midfielder last summer, will not refuse such a mind-boggling offer for a figure who has effectively become a squad player in the period since. It will be the second January in succession that they will generate a substantial fee for one of their Brazilian contingent having sold Ramires to Jiangsu Suning in last season’s mid-winter window. That deal was worth in excess of £20m, with the player doubling his salary by signing terms worth around £200,000-a-week.

The sale would grant Conte considerable leeway in the market as he seeks to reinforce his squad, with interest likely to be expressed in the Southampton centre-half Virgil van Dijk. That potential move is more likely to progress at the end of the current campaign, with the Dutch defender’s current club reluctant sellers. Regardless, the sale of Oscar will rule out any possible transfer for Cesc Fàbregas mid-season, with Conte having reiterated on Tuesday that the Spaniard remains “an important player”.