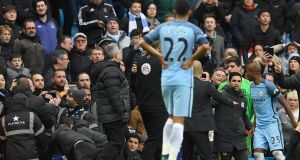 Chelsea’s Cesc Fabregas is helped to his feet after being pushed into the hordings by Manchester City’s Fernandinho during their Premier League clash. Photo: Reuters

Manchester City and Chelsea have both been fined by the Football Association following the brawl towards the end of their Premier League match earlier this month.

City have been fined £35,000 and Chelsea £100,000 after admitting a charge for failing to ensure their players conducted themselves in an orderly fashion and/or refrained from provocative behaviour.

The fracas occurred in the fifth minute of injury-time at the Etihad Stadium on December 3rd after the City striker Sergio Agüero poleaxed the Chelsea defender David Luiz with a late, high challenge.

Agüero was sent off for the tackle and his team-mate Fernandinho followed him shortly afterwards after grabbing Cesc Fàbregas by the neck and pushing him over an advertising board. Fabregas escaped any sanction despite appearing to slap Fernandinho, inciting the Brazilian.

The Premier League leaders Chelsea were in danger of a points deduction as this was the fifth time in 19 months that the club have appeared before the FA’s disciplinary panel for failing to control their players.

A warning about the future conduct of their players was put in writing to Chelsea following their part in last season’s ill-tempered London derby with Tottenham Hotspur in which it was stated that points could be docked if players continued to misbehave en masse.

Any points deduction now seems unlikely, though, and the Chelsea manager, Antonio Conte, called any possible deduction in points a joke at the weekend.

An FA statement read: “Following an Independent Regulatory Commission hearing, Manchester City and Chelsea have been fined £35,000 and £100,000 respectively after both admitted a breach of FA Rule E20(a).

“The two clubs were charged for failing to ensure their players conducted themselves in an orderly fashion and/or refrained from provocative behaviour.

“It followed an incident in the 95th minute of their game on Saturday December 3rd 2016.”