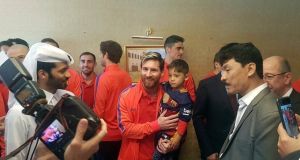 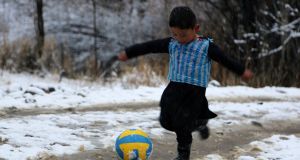 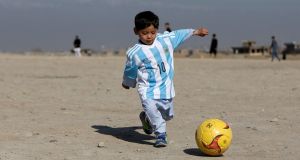 Murtaza Ahmadi (5) wears a shirt signed by Barcelona star Lionel Messi as he plays football at the open area in Kabul in February this year. Photograph: Reuters

A six-year-old Afghan boy who became a viral sensation when photographed wearing a shirt made from a striped blue plastic bag with Lionel Messi’s name and number 10 has met the Argentina and Barcelona striker.

Murtaza Ahmadi had previously received autographed shirts from Messi after photos of the boy wearing the home made shirt were widely shared.

Qatar’s 2022 World Cup organising committee said in a tweet on Tuesday the two met in Doha where Barcelona are in Qatar to play a friendly against Al Ahli on Tuesday.

“The image the world wanted to see,” tweeted the organising committee on Tuesday. The six-year-old boy who dreamed of meeting his hero, #Messi, finally comes true.”

It is understood the boy will walk on to the pitch with Messi ahead of the match.

Murtaza and his family fled Afghanistan in May to neighbouring Pakistan and settled in the city of Quetta.

At the time the boy’s father Mohammad Arif Ahmadi said they had to leave as they feared Murtaza would be kidnapped after becoming an internet sensation.

“I sold all my belongings and brought my family out of Afghanistan to save my son’s life as well as the lives of the rest of the family,” Mr Ahmadi said.

Earlier this year, the Afghan soccer federation promised to arrange a meeting between Messi, a Unicef goodwill ambassador, and Murtaza.

City Island to return to hurdles and take on Paisley Park in stayers’ 20:50
McIlroy takes his foot off the pedal and will skip the Honda Classic 20:01
GPA asks delegates to vote against hurling black card at congress 18:33
Dan Tuohy explains ‘rotten to the core’ comments 18:08
Serie A matches to be played behind closed doors due to coronavirus 17:54