Club plays down controversy over its second team, as JD Sports announced as sponsor 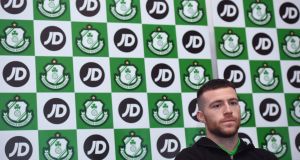 Shamrock Rovers midfielder and PFAI Player of the Year Jack Byrne during the announcement of JD Sports as the club’s new main sponsor at Tallaght Stadium in Dublin on Monday. Photograph: David Fitzgerald/Sportsfile

Stephen Bradley says he believes Jack Byrne is shaping up to have an even bigger impact for Shamrock Rovers during the campaign to come, despite the 23-year-old having earned senior international caps and the PFAI’s Player of the Year award in his debut season with the Dublin club.

“He is a top player, the best player in the country, [and] it’s up to him now to go again this year and I think that he will,” said the Rovers manager as JD Sports was announced as the club’s new main sponsor.

Byrne played a key part in the club’s FAI Cup win over Dundalk and should be involved again this Sunday as the two clubs meet in the President’s Cup at Oriel Park. Bradley will be without Seán Kavanagh for the game, with the former Fulham player set to be sidelined for more than a month of the new season after having undergone surgery on his knee in recent weeks.

Bradley said he and his side would go into the game intending to win, but the greater ambition was to improve again on last year. He may still strengthen the squad, he said, with a new striker one of the possibilities.

Rovers chairman Jonathan Roche said that the club is completely confident that its second team will be playing in the first division of the league this season. The FAI is due to announce this week which clubs have received the licences required to participate, but the bigger question mark on that front hangs over Limerick ,which only gained access to the application process after initiating legal action.

Other first-division clubs have said they will not play the Rovers development side, which is to be managed by Aidan Price, but Roche said he cannot see the problem.

“I have been surprised by a lot of it,” he said. “Obviously it needs to be worked out because you don’t want anyone boycotting games or anything like that. I don’t think we’ll harm the first division at all, but I’m not going to tell someone what they should think. We are just planning for the season for all our players, from Jack Byrne down to our Under-10s.

Dundalk, meanwhile, have confirmed the loan signing of Cammy Smith from Dundee United.

“Cammy is an extremely talented player who can play in any of the three positions behind the striker,” said manager Vinny Perth. “He is hardworking and an extremely technical player. He is on loan until the summer with a view to making it a permanent deal, and we obviously hope that happens because it will mean he has had a good spell with us.”