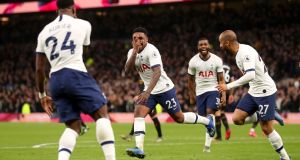 Manchester City might have played for 78 minutes of this see-saw game with 10 men only for Raheem Sterling to get away with a horribly late tackle on Dele Alli. But when they did have a man sent off – Oleksandr Zinchenko for a second bookable offence in the 61st minute – it was the prompt for Tottenham to throw off the shackles and fire the wildest of turnarounds.

Until then, it was difficult to overstate City’s dominance. Sergio Agüero missed a clutch of excellent chances and Ilkay Gundogan had a penalty saved by Hugo Lloris as Pep Guardiola’s team set up residence in the Spurs half.

Yet profligacy has been City’s enemy on numerous occasions this season and they could count the cost once again after the red card.

Tottenham’s hero was their £25m new signing Steven Bergwijn who started on the left wing and impressed with his work-rate, although not as much as he impressed in the moment when he conjured the breakthrough goal. It was a stunning piece of technique and it seemed to unfold in the blink of an eye – the chest control from Lucas Moura’s chipped pass followed by the right-footed volley from the edge of the area that flashed low into the far corner.

Bergwijn and the Spurs support were in dreamland and, shortly afterwards, Son Heung-min made the points safe with a shot that deflected slightly on its way past Ederson. José Mourinho needed a statement victory and this was it, even if it involved slices of good luck – his team were also fortunate not to concede a second penalty moments after the first when Lloris appeared to catch Sterling. It helped Spurs to close the gap on fourth-placed Chelsea to four points.

City could scarcely believe how the fates had conspired against them, with their afternoon summed up when the Spurs defender Davinson Sánchez miscued an attempted header in stoppage time only to see it crash against his own crossbar.

Pep Guardiola’s team had seen Liverpool break another record on Saturday with their home win over Southampton which took them 22 points clear at the top of the table – no English club has ever held such a lead in the top division – and City’s players have certainly had to recast their Premier League aspirations. There is a big difference between a title defence and trying to ensure a runners-up spot. And, it has to be asked, is there a great difference to City between finishing second and fourth?

City were fractionally out of sync when it mattered the most, although the game might have had a different tone had Sterling been dismissed in the 12th minute. Sterling had over-run the ball and, when he lunged for it, he missed it and clattered into Dele Alli’s ankle, making the joint of the Spurs player buckle alarmingly. It was the sort of challenge that can lead to serious injury.

Mike Dean, the referee, showed a yellow card and a VAR check for serious foul play ruled against an upgrade to red. Mourinho put his hands to his head in disbelief after watching a replay on an iPad in the technical area. It was merely the start of the VAR-based head-scratching.

When Serge Aurier zeroed in on Agüero inside the area in the 36th minute, every Spurs fan had the same thought: “Please, Serge, don’t dive in.”

Aurier dived in, catching Agüero, who went down. No penalty said Dean, and play went on for about three minutes. Whereupon it was abruptly halted for VAR to award the penalty. Mourinho lolled back in his seat, laughing out loud.

Gundogan’s kick was saved by Lloris, who sprang back up to reach the loose ball in front of Sterling but he was not quick enough. Sterling got there first, touched it away, felt contact from the goalkeeper and went down. Cue a melee between both sets of players. It looked like another penalty but this time VAR said no. So did it add up to a second yellow card instead for a dive by Sterling? Apparently not.

What the controversy could not disguise was City’s supremacy. Guardiola had set up in a 4-1-4-1 system and his players hogged possession, the fluidity of their movements and interchanges ever easy on the eye. Where was the end product? One moment rather summed up City in the first half. Riyad Mahrez took a glorious touch to kill a high ball in the inside right channel but, rather than push in on goal, he stopped playing. He indicated that he had heard a whistle, presumably for offside. There had not been one.

Agüero had the chances to have had a first-half hat-trick. He miscued following a Kyle Walker cut-back; watched Lloris deflect a shot against the post after a Mahrez pass and poked wide from point-blank range, albeit with the angle tight, when the ball broke following an Aurier tackle.

Sterling, who would be forced off with a hamstring injury, and Alli had words before the start of the second half, which looked amicable and ended with a handshake between them, and City continued to call the tune upon the restart. It was all Spurs could do to get out of their half at that point and how they missed a focal point to their attack. Somebody like Harry Kane, say, or, as Mourinho might like to point out, any recognised No 9.

City blew another clear chance after Toby Alderweireld cleared off the line from Agüero and Sterling opted to pass to Gundogan rather than shoot when well-placed. It was too heavy and Gundogan, on the stretch, lifted high.

City were the architects of their own downfall. They mucked up a short corner routine, allowing Harry Winks to break at pace, and he was cynically checked by Zinchenko, who had been booked during the confrontations following the non-penalty award for Sterling. Dean finally got a decision right and dismissed him. It was the prompt for Bergwijn and Son to rewrite the script.