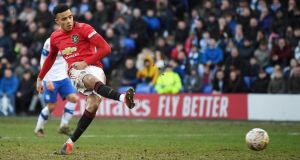 Prenton Park promised a depressing pitfall for Ole Gunnar Solskjær but instead it provided respite. His Manchester United team eased into the fifth round of the FA Cup with a comprehensive victory at Tranmere Rovers – the club’s biggest since the 8-2 defeat of Arsenal in 2011 – as a troubled week at Old Trafford ended without a fresh sense of crisis.

Tranmere, 21st in League One and tiring throughout, were no match for United from the moment Harry Maguire struck his first goal for the club in the 10th minute. The visitors were three up by the 16th minute and any trepidation that Solskjær may have felt at visiting a lower league opponent operating on a mud bath of a pitch evaporated.

The prospects of an upset vanished in quick-fire fashion but Tranmere did make a determined start in their quest for a second Premier League scalp inside four days. Until Maguire opened the scoring with an emphatic strike the home side, unchanged from the team that defeated Watford after extra-time on Thursday, threatened an uncomfortable afternoon for their big-name visitors. Morgan Ferrier twice broke clear inside the United area, Connor Jennings snatched at a shot straight at Sergio Romero, Maguire was forced into a desperate clearance in front of his own goal and Phil Jones, stationed in the centre of a three-man defence, was booked for a foul on Ferrier before being clattered by the impressive Corey Blackett-Taylor. He emerged caked in mud from a sodden pitch. This had all the makings of a long and awkward Cup tie. It was to United’s credit that they turned it into a procession into round five with three goals in six minutes.

The identity of United’s goalscorers will have encouraged their manager as much as the confidence behind their first three shots of the game. Maguire had not scored for United since his £80m arrival from Leicester last summer but opened his account in fine style when Nemanja Matic found him in space deep in the Tranmere half. The England international cut inside David Perkins before unleashing an unstoppable right-foot finish into the top corner of Scott Davies’s goal. United settled instantly and assumed complete control of the tie from that point onwards.

Diogo Dalot, operating on the right of United’s four-man midfield, followed Maguire’s lead in claiming his first goal for the club minutes later. It was another quality finish. Dalot exchanged passes with Anthony Martial outside the Rovers penalty area and twisted left-back Liam Ridehalgh inside and out before finding the far corner. Another surging run out of defence by Maguire led to United’s third. The central defender found Jesse Lingard and, although Maguire had continued his run into the penalty area, the midfielder used the space to curl a delightful shot around Peter Clarke and beyond Davies’s despairing dive.

Tranmere’s hopes of another shock or a lucrative replay at Old Trafford were shot. Their concern now was to avoid a repeat of last season’s 7-0 home defeat by Tottenham in the third round and, given the calibre of United’s finishing, another rout always looked a distinct possibility. By the interval United, without a goal in their previous two matches, had scored five first-half goals for the first time since beating Arsenal 6-1 in February 2001.

Jones scored the fourth with a towering header from an Andreas Pereira corner that sailed over Davies and Perkins on the Tranmere goal-line. Martial swept the fifth into the top corner via a deflection off Kieron Morris before being replaced at the interval by Tahith Chong. The youngster’s first significant contribution was to seize on a pass from Mason Greenwood while several Tranmere defenders hesitated inside their own area. Chong touched the ball beyond Davies before being sent sprawling by the goalkeeper and Greenwood dispatched the penalty confidently.

United’s biggest victory in almost nine years signalled welcome relief for their manager though not the club’s owners. The away contingent, who sang Solskjær’s name throughout, reiterated their disdain for those at the top with chants of “We want Glazers out” and “We want United back”. They were not here in person to hear it, of course, and nor was executive vice-chairman Ed Woodward who was subject to fierce abuse during the midweek home defeat by Burnley.

Lingard and Chong both struck the woodwork in the closing stages as Tranmere at least avoided a repeat of the Spurs’ scoreline. United cruised into the fifth round professionally and comprehensively. - Guardian