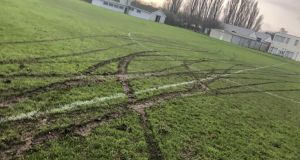 The Whitehall VEC pitches were damaged by vandals

Less than a month after council pitches used by the schoolboy section of Cabinteely Football Club were extensively vandalised, pitches at Whitehall VEC, which are used by Home Farm, Whitehall Celtic and Rosmini Gaels, have been damaged.

Home Farm officials were trying to assess the extent of the damage to three pitches – an 11 a-side, nine-a-side and five-a-side – on Sunday afternoon but hope to be able to have the main pitch functional in time for games next weekend. An under-17s match and a girls’ tournament involving three different, younger ages that included sides that had travelled from the North all had to be moved after the damage had been discovered.

“We are lucky because the damage here isn’t as bad [as it was in Cabinteely],” said Home Farm chairman Pat Clifford, who believes those responsible are from the area and initially suspected that the damage had been done with a quad bike before receiving reports back which suggested that it had actually been a stolen car, “but half of the 11 a-side is pretty torn up”.

“It could have been worse but the annoying thing is that anyone would do this at all. It’s not the first time it has happened. We had a similar problem a couple of years back when the pitch was out of action for a month. We think the people doing it are teenagers and need parents to make sure that it doesn’t happen again.

“We hope to be able to use it by next weekend but you are looking at €1,000 or more to get in sand and get some work done on it and that’s doing it on the cheap, really. We’ll know better how we are fixed by Thursday.”

Representatives of the country’s elite level referees, meanwhile, will meet with League of Ireland officials on Thursday when the failure of almost a third of the league’s panel of match officials to pass new Fifa fitness tests is set to be discussed.

The tests involve requiring officials to cover particular distances in specified times and the problems arose after standards were dramatically raised from last year and 23 of the 70 participants over the weekend failed to meet the new required levels. It is expected that those who did not pass will be given the opportunity to undergo the tests again before the start of the new league season.

The meeting on Thursday had previously been scheduled to discuss payments and expenses for the coming season but there is growing anger on the referees’ side over a series of cutbacks that are viewed as having left match officials badly under-resourced.

A number of referees at a seminar on Saturday intended to discuss outstanding issues ahead of the new season, including changes to the laws of the game, are reported to have walked out in protest at the fact that it had been cut from two days to one with less than an hour said to have been set aside for a briefing on the rule changes.

Although clubs often complain about the cost of having their games refereed, the match officials say that they have had to buy their own equipment, including headsets, in recent seasons.

1 Mary Hannigan: ‘Bitches Who Stood’ might be better viewed as useful allies
2 Leinster’s clash with Saracens will open Champions Cup quarter-final weekend
3 Game Changers: Living beyond fear puts Alex Honnold above all others
4 Jack Charlton’s funeral to take place in Newcastle next Tuesday
5 America at Large: Deafening silence after anti-Semitic spewing
Real news has value SUBSCRIBE
Crossword Get access to over 6,000 interactive crosswords