More at stake for Arsenal as they prepare for Chelsea showdown 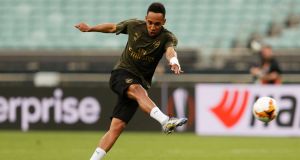 For all the Europa League branding embossed over Baku’s Olympic Stadium, European football’s little brother could not quite escape the influence of its big brother.

If there is one thing that adds an extra edge, an extra layer of intrigue, to this oddity of a London derby taking place roughly 2,500 miles from Big Ben it is that there is more than a trophy at stake.

Arsenal desperately crave the return to the Champions League that triumph would bring in this final. Chelsea can deny them that, knowing how damaging it would be to a rival if they get to hoist the silverware.

Everything changed for the Europa League the moment Uefa decided to varnish the competition with the gloss of Champions League qualification. Unai Emery attempted to suggest there was nothing between the teams in terms of motivation, desire and the size of the prize, but the truth is the stakes are incomparable.

In the blue corner, the team who have already reserved their seat at Europe’s top table for next season can afford to be more relaxed. Of course they want to win a final and cherish tangible success.

But in the red corner, it is difficult to overstate just how critical this match is to Arsenal. Returning to the Champions League after a two-year hiatus has been their No 1 aim all season. No one is under any illusion about the perils of missing out, with the multimillion-pound knock-on to their transfer budget and their capacity to attract and keep players, at a time when the Premier League seems to be getting more competitive.

“I want to help Arsenal to achieve everything in our way,” Emery said. “One is Europa League, another is improving to achieve the best position in the football world. Arsenal will be in the 10 best teams of the world. Our objective is to achieve that.”

He knows full well that one match in Baku can go a long way to making that more or less realistic.

For Emery, the Europa League specialist in search of a record fourth title in a competition he is fond of, the Champions League is the elephant trumpeting loud and trampling all over the dressing room.

Granit Xhaka summed up how the players feel.

“It is an amazing and important game,” he said. “We want to give us, the club and the fans the Champions League back. If you saw the season maybe we deserved it. It is more than a big game.”

There are layers of subtext all over the pitch and in both dugouts: Maurizio Sarri’s future, and popularity, is on the line. Triumph for Emery would guarantee a successful first season and buy him extra trust going forward.

Eden Hazard may be playing his last game for a club he has illuminated so wonderfully. Danny-Welbeck returns from serious injury for his own farewell match, potentially from the bench.

Petr Cech has the extraordinary chance to retire with a trophy against his former, and probably future, employer. Olivier Giroud has a big history with the opposition. Arsenal’s players want to take the trophy home to deliver to the absent Henrikh Mkhitaryan. Chelsea have an injury crisis in midfield.

With the political backdrop that has shadowed the destination of this final, it is pertinent to distinguish between the Mkhitaryan problem – which sees the Armenian player staying in London because of the historical conflict in the region between his country and Azerbaijan – and the unusually low number of travelling fans from well-supported clubs who have been discouraged from attending because of the woeful shortage of simple, affordable travel.

The opportunity to visit somewhere off the usual radars really should make for an enticing location for a final. Uefa hopes the stadium will be pretty full in any case.

Now the teams are here they are fully focused on football. Sarri described Chelsea’s season as “wonderful” for their Champions League qualification and this final, and he wants to make it even more wonderful.

“In this moment I love the players and love English football,” said the Italian.

Having missed out in the Carabao Cup final the players want to end the season with a winning feeling.

Emery is not short of motivation with all the aims he has for Arsenal.

“When I arrived here we changed some things. I did not promise titles, I promised to compete. What Arsène Wenger did in this club was very big. He managed to give a touch of quality to make the game more fluid and colourful, but little by little he lost the competitive gene. That is what was transmitted to me and what I was hired for.”

In doing so he wants the blend of aggressive football, aesthetic football, and winning football. They will need that blend in the final with so much to gain and such a lot to lose. - Guardian