Kenny rejects idea of picking only British-based players for Toulon 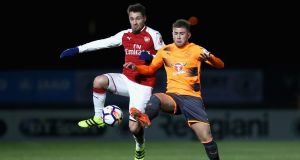 Reading winger Josh Barrett has been called into the Republic of Ireland under-21 squad for the upcoming Toulon tournament. Photograph: Alex Pantling/Getty Images

Stephen Kenny has rejected a suggestion by Shamrock Rovers manager Stephen Bradley that he should only have selected British-based players for the under-21 squad he is bringing to Toulon this weekend given the disruption that including six League of Ireland players has caused to the league schedule in June with Waterford and UCD having three games postponed each.

“To say that when we go to a prestigious tournament with a worldwide TV audience that we should not pick players from our league, we should only pick players from England, I couldn’t agree with that,” said Kenny as his squad gathered for a first day of training at Johnstown House in Enfield.

“I think that’s a point of view and it’s not my point of view. We’d like to get to the stage where every match would be cancelled in every international window, that’s what you want. The league should aspire to have that. But we’re not at that level now.

“For years in recent history the league didn’t have an under-21 international player for a full calendar year. But I think we’d eight in the last squad and ended up with nine, so we’re giving players the opportunity to really excel at the highest level and that kind of exposure, that in itself reflects well on the league.”

One of the league’s current contingent, Neil Farrugia, has been ruled out of this tournament, which kicks off for Ireland with a game against China next Monday. The UCD winger sustained a hamstring injury in last Friday’s game against Waterford, which has turned out to be more serious than initially thought.

“He is devastated because this was a big opportunity for him,” said Kenny of the Dubliner, “but that’s just the way it goes and we have called up Josh Barrett.

“He’s a very different to Neil, not a chalk on the boots sort of winger, he is a right-footed player who plays on the left but looks to cut inside. It’s a good opportunity to have a look at him. He’s had a good end to the season at Reading.”

Before travelling, the team take on the senior Irish side in a training game at Abbotstown, with Kenny suggesting that as most, if not all, of the players will get a run out. Ireland’s other group games in Toulon are against Bahrain and Mexico with at least one further game guaranteed.