Mick McCarthy in line to take charge of Apoel in Cyprus 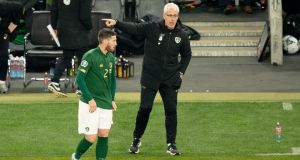 Cyrpiot club Apoel have said that Mick McCarthy will be in Nicosia over the weekend to hold talks about taking up the vacant manager’s position. The 61-year-old, whose second stint as Ireland manager finished at the start of the summer, will watch the team’s league game against Apollon at the GSP on Saturday afternoon, the club announced via social media.

The news was something of a surprise with McCarthy not having featured in the initial speculation earlier this week over who might succeed Greek coach Marinos Ozonidis who was sacked after a poor run of form that has left Apoel 10th of 14 sides in the Cypriot top flight.

The club, which won seven straight titles between 2013 and 2019, had a poor season last year but had extensively overhauled their squad in the summer. Having been eliminated from the Europa League at the start of the month, however, Apoel had lost two and drawn one league game before the decision to axe Ozonidis who had returned in February for his second spell in charge.

If McCarthy takes on the role he would become the club’s sixth manager in two seasons with the list of recent incumbents all from different countries including former internationals Thomas Doll of Germany and Norway’s Kare Ingebrigtsen.

The former Republic of Ireland captain has never managed in club football outside of England but he did have a stint in France as a player some 40 years ago. Apoel’s most obvious Irish link is with Cillian Sheridan who spent a couple of years there and helped the club to two league and cup doubles.

The current squad is a pretty diverse one with a handful of locals augmented by players from, for the most part, across Europe, South America and Africa.