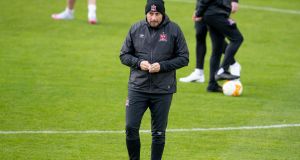 Dundalk manager Filippo Giovagnoli: ‘Mikel Arteta and the style that he wants to implement with Arsenal is completely an inspiration for us.’ Photograph: Morgan Treacy/Inpho

Having made clear he reckons there is less pressure of Dundalk this week than last given that nobody really expects too much of them against a side as good as Arsenal, Filippo Giovagnoli felt the need at one point during his pre-match conference to clarify that he was “joking” when he described the club’s second Europa League group stage outing as “preparation for the game against St Patrick’s”.

The general mood was certainly lighter than ahead of the home game against Molde which, he acknowledged, had been seen as more likely to yield points for the Irish side. Opposition analyst Shane Keegan said that after showing the squad a video intended to highlight Arsenal’s weaknesses this week, Giovagnoli’s assistant, Giuseppe Rossi, said he had gone from thinking the League of Ireland champions would be “hammered” to believing they would win.

“‘You made them look so bad,’ he said to me,” recounted the former Wexford Youth boss before acknowledging that “obviously it took a long time to find the clips”.

The manager seemed a little exasperated that an English reporter felt the need to illustrate the starkly different worlds inhabited by the respective clubs with a reference to Mesut Özil’s salary.

“Yes,” he said, laughing a little, “there’s a big difference, and . . . but what is it you think I have to respond to with this? It’s obvious that it is like a heavyweight boxer against a super-lightweight. Right? So, we just need to try to make them uncomfortable, a little bit.

Ultimately, both he and Keegan agreed, they will have to be relentlessly focused on the defensive side of things against a side they can expect to punish them for any lapses, but also be alert to the moments when there is the opportunity to make their own mark on the game.

Giovagnoli insisted that despite his inexperience of these sorts of encounters, he is not at all overawed by the occasion. But the 49-year-old admitted that he is looking forward to meeting his opposite number, Mikel Arteta, whose approach to the game he clearly admires.

“Mikel Arteta and the style that he wants to implement with Arsenal is completely an inspiration for us, trust me,” he said. “The way they want to build up, they even did it against Liverpool, one of the best teams at pressing in the world. They didn’t care, they just wanted to build up from the goal. It’s amazing.”

Earlier, Arteta had spoken respectfully about the visitors and sounded intrigued by the Italian’s backstory: soccer academy coach in New York to Europa League manager in just a few short months.

“I think it’s a great story,” said the 38-year-old of the Italian whose appointment at Oriel Park in late August came entirely out of the blue. “Linking different backgrounds and different countries into that history is a good one to hear. I read a very long interview of his because I wanted to know who he is, what he is trying to do and what he is trying to express to his players, and this is how I found out about what happened [Giovangnoli’s background].

“Straight away, he said that he could feel that the players believed in what they were doing which is everything that a coach wants. I think they have created a really good chemistry. We’ve got some Irish staff here and I’ve been told a lot of positive things about them. What I’ve seen is a really determined coach that has found a really good creation around the team, you can see in every reaction of how they are playing, how united they are.”

The hosts are without David Luiz, one of the team’s two goalscorers when they came from behind to win in Vienna last week. Arteta did not sound as though Willian is fit enough to play 90 minutes. There are likely, in any case, to be several changes to the side that lost to Leicester on Sunday, with a number of first team regulars set to be rested.

After Sunday’s league defeat Gary Rogers, Pat Hoban, Darragh Leahy and Greg Sloggett are all set to return to the Dundalk starting line-up as Giovagnoli reverts to something very like the side that started against Molde.