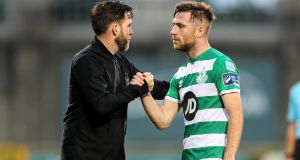 Shamrock Rovers manager Stephen Bradley has said that Jack Byrne has struggled to get back to action after contracting coronavirus. Photograph: Laszlo Geczo/Inpho

Stephen Bradley says that midfielder Jack Byrne has been badly affected by coronavirus and is still struggling to get back to full training several weeks after having to leave the Ireland squad following a positive test.

“Jack is still struggling a bit,” said the Shamrock Rovers manager at a pre-match event arranged before Derry City had said that Wednesday night’s league game could not go ahead due to a couple of cases of the virus around its squad.

“It’s hit Jack bad, to be fair,” he continued. “He’s probably the worst out of the group. He started running, but hasn’t looked good the last few days. He’s trying but just has no energy; he can’t get the oxygen in. So we’ll have to look at Jack. He’s going to try again today to do a little bit, but he’s got hit with it bad.”

Rovers have had four players come down with Covid-19 in total. Byrne tested positive while on international duty, then Aaron Greene and a further two squad members were diagnosed after having initially been categorised as close contacts.

Bradley said that all of the players affected bar Byrne were back to full fitness and would have been available to face City. He was disappointed, he admitted, that the game had been postponed but said he appreciated the position City are in. “You can’t get annoyed or angry because you can’t control it. They [Derry] are thinking about their players and their staff.”

Bradley said he was delighted that Rovers had gotten over the line in the title race regardless of the fact that the club’s 18th title had ultimately been clinched thanks to a defeat for their closest rivals Bohemians. He said he was happy to take the success whatever way it came and that, because of the circumstances, he had celebrated it quietly at home with his family.

He admitted that there had been many occasions over the past four years when he had questioned whether he would deliver the success expected by the club but insisted that whenever he reflected on it, he remained convinced that he was moving in the right direction.

“There were loads of times when there was doubt but that makes you analyse what you’re doing and where you’re going.

“We always knew it would take time because Dundalk were so dominant and Cork were strong too but I think one of the turning points for me was Dundalk last year at home, after the break. They beat us 1-0 in Tallaght but we were so dominant in that game in every aspect. That was the one where I felt the players really believed and went and grabbed it although we’d lost the game. There was so much that was positive to take out of it.

“It looked [from the table] last year like we were well off it, but we were very, very close if you broke it down, took the emotion out and analysed each and every game. We were very close to getting it done but there was a period of a week to 14 days that threw us.”

He admits to being far better equipped to deal with the challenge by that stage than he had been in late 2016 when he was handed the job after a short spell as caretaker.

“Was I ready to take it at the time? Probably not,” he says. “Were the group where we needed them to be for me to take it at that time? Probably not. So there was so much against it at the time. There was so much that had to change. The club was changing so much on and off the pitch but I knew I had a clear vision; I knew what needed to be changed.

“When we broke it down it was time to either go in and do it or shut up. You probably never get the chance to manage the club again so I had to take it and take everything that came with it.”

Bradley says that he will not take anything for granted with regard to next year when his side is likely to face renewed challenges from Dundalk and Bohemians in the league and a fight to progress in Europe despite new structures that should make qualification for the group stages more achievable than before.

But the squad, he believes, will be stronger again despite the current uncertainty caused by the pandemic.

“We’ve spoken to the board in great detail the last few months about targets and plans if we win the league, and targets and plans if we don’t, financially if crowds are allowed in, where it leaves us and if they are not, sponsorship, everything that comes with that. Now that it’s done we know exactly where we are in terms of budget and targets that we want and how we can improve for next year.”