Michael Walker: Former Ireland international won at life both on and off the pitch 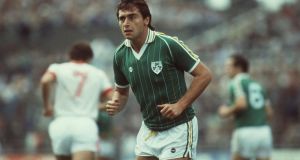 Robinson in action for Ireland in 1984. Photo: Billy Stickland/Inpho 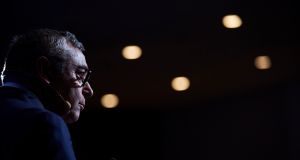 Michael Robinson speaks during the presentation of the initiative ‘Getting into the Game’ in Barcelona last March. Robinson died on Tuesday aged 61. Photo: Alejandro Garcia/EPA

Michael Robinson won. It is important to remember that in the week he lost his life to cancer. Robinson won at football – the medals on the table, caps in the drawer and pictures on the wall tell us that. He also won at life.

In the hours after the announcement of his death on Tuesday morning, aged just 61, came some recent words from the man born in Leicester who grew up on rough Blackpool streets, played for Liverpool and Ireland and became a legend in Spanish broadcasting: “Luck has shone down on me.

“I don’t think life owes me anything. If anything, it is the other way round.”

It is one measure of the man. Another was the scale of the sadness in Spain. The country enriched Robinson and he enriched it in return. He transcended nationality, language, culture and himself to become an everyday hero in a place he knew nothing about until “January 6th 1987 – the most important day of my life”. It was the day he signed for Osasuna in Pamplona.

Within five years Robinson had made his mark on the pitch in Spain and off it. He had talent, intelligence, experience and wit. Most of all, he had what Bill Shankly called the greatest gift of all: “Natural enthusiasm”.

To be in Robinson’s presence, even a few times, was to witness a man who treated each day like a near-post header that needed to be met. Even if it went wide, Robinson would smile. The story was in the effort to get there.

And, as has been said since Tuesday, Michael Robinson loved the story. He knew one when he heard it and he knew how to tell one. Then he’d tell another.

Frequently those stories flowed in the bars and restaurants near his Madrid office where the gin and tonics arrived in glasses so large you didn’t know whether to pick them up or dive in. It was drink or swim and hours into lunch you’d stand up only to discover deckchair knees below. Robinson, meanwhile, was assailing the company with another tale.

Thinking back, it feels like a dream sequence but it was real. Vitality poured out of him. As the Spanish director and journalist Alfredo Relano recounted this week, even when the cancer was closing in, Robinson told him: “Look, this is going to kill me sooner or later, but it’s not going to kill me while I’m alive.”

That gives a flavour of Robinson and flavour was something he understood more than most in football and sooner than most in broadcasting. Having enjoyed and endured the reality of professionalism at Preston, Man City, Brighton, Liverpool, QPR and Osasuna, Robinson discovered the taste of football at Italia 90. Or re-discovered it.

In Italy as a commentator for Spanish TV, and as an observer, Robinson found himself articulate in an adopted language. He was expressive, inventive, persuasive. It was not how he had thought of himself during matches.

The sights, sounds and smells of Spain reawakened the child in Robinson, the boy who had been first taken to Anfield in 1963 to see Shankly’s team and Ian St John.

“It sounds romantic,” Robinson told Simon Hughes in his book Red Machine “but my dad tells me that I’d fallen in love with football before the teams came out. We stood on the Kop and the crowd were singing, ‘We love you, yeah, yeah, yeah – with a team like that, you know you can’t be bad.’”

Yes, it did sound romantic, but that’s part of what he understood and conveyed. It was part of the Robinson template.

He could read a game: the first time I met him was in March 1998 when two English clubs, Aston Villa and Chelsea, had games in Spain in the space of three days. Robinson thought Villa would struggle at Atlético Madrid, even though Juninho was injured. Villa lost 1-0. But Robinson felt Chelsea, with Gianfranco Zola starting, would win comfortably at Real Betis. As he said: “Chelsea are surgeons; Betis are general practitioners.” Chelsea won.

But Robinson was a lot more than that. He described himself as “bohemian” when compared to your average post-match footballer. Sometimes, he accepted, it had worked against him, but in Spain he found an audience. “Communication is a vocation,” he said.

“Desmond Morris wrote a book about football crowds in England; well, he should have come to Spain to write it, he would have seen so many differing species.”

He talked about John Arlott, Thatcher’s Britain – in which he had played and detested – and went on about Cadiz so much I went there on holiday. Robinson bought into the Cadiz club and convinced himself his Cork grandmother’s roots somehow led back to the Spanish Armada.

When two of his TV show’s cameramen came in he introduced them as “the real stars”. He was sincere. Robinson had a visual perception akin to a photo-journalist. He hadn’t wanted to be a presenter, it was a “malnecessario” he said.

“Football is a game of space,” Van der Meer said. “So why should you leave the space out? Every Monday in the newspapers you see the same stupid, boring close-ups.”

Van der Meer photographed everything else at a match; Robinson’s attitude was similar. Football was not, is not, all about goals, offsides, professional close-ups, winning.

His Irish experience maybe re-enforced that. Robinson made his debut in Paris in late 1980 in a qualifier for the ‘82 World Cup in Spain. He scored to make it 1-1 but it was disallowed, dubiously he felt. France won 2-0.

In a group featuring France, Belgium and the Netherlands, Eoin Hand’s Irish team missed out on qualification on goal difference with France. “I feel we were cheated out of that World Cup,” Robinson told the Evening Herald a decade ago.

“Eoin Hand back then had the finest football team Ireland ever had and yet we had under-achieved, we had failed to make the World Cup. Sides have brought great glory to Ireland since then but I feel we played the best football Ireland ever played. That was some side we had and we deserved so much more.”

Instead it was Jack Charlton – Robinson referred to him as “Jack Flinstone” – who found qualification. “Wonderful success born out of a prehistoric anarchy,” was Robinson’s waspish description of Charlton’s football.

Jack Charlton would lead him back to Bobby Charlton. One night around 1974 there was a knock on the Robinson front door in Blackpool. It was someone from Preston North End and, as Robinson recalled, he thought he “looked like Bobby Charlton”.

It was Bobby Charlton, who was then Preston manager. Quickly, Robinson signed for North End. Imagine it. What a story.

From that moment he was off, off on a career that took in six clubs, 24 caps and a hundred thousand more stories told by a man with, as El Pais put it, “true charisma and genuine authenticity” told by an independent spirit with a generous heart and a winning smile; because Michael Robinson won.

1 Exiled Seán O’Brien not ruling out a third Lions tour
2 View from Melbourne: Sporting fabric of the city suffering from second lockdown
3 Gaelic football continues to lose its lustre
4 Heroic insanity: When Michael Dunlop raced home in memory of his father
5 Caffeine still the key to legal performance enhancing
Real news has value SUBSCRIBE
Crossword Get access to over 6,000 interactive crosswords