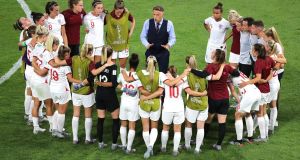 Sometimes this quarantine situation gets to me. Some days I think of all the joy and little pleasures it has robbed me of. Other days I find myself feeling sorry for certain individuals, such as Phil Neville. Or maybe not.

He’s just essentially got fired from the job we were all lucky and fortunate he accepted. Or so he’d have us think. Us sports fans have been robbed of a glorious Neville farewell press tour. Imagine the much-needed content he would drive.

About two years ago he told everyone that there were plenty of people who wanted to see him fail - but he was completely unaware people were annoyed that there were better and more suitable candidates than him to manage the English women’s football team.

“Well actually if you’re looking at the candidates that went for this job, I’m probably the best because I’ve worked at elite level,” he coyly revealed on his big announcement day.

In fairness, Neville got off to a good start. Winning a SheBelieves Cup on US soil and beating highly ranked teams who were either post European Championship or treating the SheBelieves Cup as a platform for growing a new team.

He managed to generate some excitement and brought extra attention, to a certain degree, to some important issues. For example, he used his platform to highlight women’s teams being made to travel in economy class, even on long haul and non-direct long-haul flights. Not something he’d be too used to himself.

Neville’s management style was always praised by the England women’s national team. He was incredibly hands-on and thrived on player management, having a sort of one-to-one understanding with all the players. As he always reminded us. He sent every player a message (or seven) every day. He kept tabs on their ice cream intake, if they had dogs he knew their names, he knew if they had partners and whether they liked going to the cinema. All standard, from a big-name manager.

But Neville knew what he needed to do on the field - he needed to bring a Women’s World Cup home. And after disgraced coach Mark Sampson brought his side to a third-place playoff in 2015 Neville was determined he was not going to be outdone. Not by some rookie.

Throughout last summer’s Women’s World Cup, he provided us with soundbites for years to come. He was combative throughout the tournament, outspoken during interviews and not afraid to call other teams out. The man had ambition and a vision. He said he was “completely and utterly ashamed of the opposition and their behaviour” after the team’s win over Cameroon. And after their semi-final defeat to eventual winners USA, he branded the third-place play-off a “nonsense game”. And then lost it to Sweden. Not in keeping with how he told us the tournament was going to unfold.

And yet, the noose didn’t seem to really tighten around Phil like it would for other managers. Yes, fourth place in an increasingly competitive tournament isn’t bad, but England started personifying their coach. They showed up for spurts and relied solely on individual brilliance and timing rather than dominating as a collective unit.

But Neville - knowing the now postponed Euros 2021 at home in England was still ahead of him - did not give up. Or quieten down. Speaking before, between and after a draw and a loss away to Belgium and Norway in friendlies he told us that he has “a vision that nobody else has.

“I’ve got bravery that no other coach has probably had. So do you know what? Thank your lucky stars I’m here. I’m here to stay.”

But, the FA don’t really appreciate playing your best number 10 on the wing, they don’t like when your squad rotations disrupt the actual fluidity of your starting 11, they don’t like the fact that a former England and Manchester United defender can’t coach his team to defend corners or simple set pieces.

And then came the coronavirus outbreak, leading to the postponement of the Euros and Olympic Games for a year. Meaning Neville will see out his contract when sport resumes until July 2021, but the FA have decided to replace him when the major tournaments come around.

So when Phil Neville is looking back to see where it went wrong, one thing is for sure, if he had half the vision he claims he does, football may well have come home. Talk is cheap.