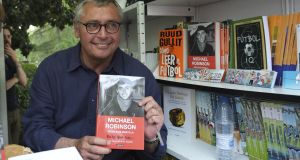 Mark Lawrenson remembers his former Liverpool and Republic of Ireland teammate Michael Robinson, who has died of cancer in Madrid, as a player who made the very most of his talents before successfully establishing himself as an intelligent and engaging presenter on Spanish television.

Born in Leicester and brought up in Blackpool, Robinson’s clubs career included stints at Preston North End, Manchester City, Brighton, Liverpool and QPR before his move to Spain. Though never an automatic first choice during his short stint at Anfield given the presence of players like Kenny Dalglish and Ian Rush, he still featured enough for the club through his one full season there to qualify for winners’ medals in the League, League Cup and European Cup.

His contribution to the title win was significant enough, with six goals in 30 appearances.

After something of a struggle to confirm his eligibility, he made his international debut for Ireland in the 2-0 defeat by France in Paris in October 1980 and went on to win 24 caps, scoring four times. Three of those came in the 1982 World Cup qualifying campaign with one earning Eoin Hand’s side an away draw against the Netherlands, another helping the team to a famous 3-2 defeat of France in Lansdowne Road. The team ultimately missed out on qualification in hugely controversial circumstances.

Robinson remained a regular for a few years, usually partnering Frank Stapleton up front in what would generally have been regarded as Ireland’s strongest line up, but he gradually slipped to the margins as the likes of Tony Cascarino then John Aldridge and Niall Quinn came onto the scene.

He barely featured under Jack Charlton and made his last appearance in Reykjavik in a 1-0 defeat of Czechoslovakia, part of a triangular tournament which Ireland won in May 1986.

The following year he moved to Spain to join Osasuna but his playing career was ultimately cut short by injury and he was forced to retire in 1989, aged just 31.

Rather than return to England, as many would have expected, however, he settled down and having learned the language began to do some media work, establishing himself as an analyst on radio by the time Italia’90 came around. He would subsequently go on to become a major television personality, working as a pundit then presenter first in football but then also in current affairs.

For many years, he fronted his own show on Canal+ thanks to which he enjoyed a very high profile with his work very well regarded.

“When he went to Osasuna , I assumed he have a couple of years out there and then come back but the next thing we heard he was working on the radio and then on the television,” says Mark Lawrenson who crossed paths with “Robbo” many times over the course of their playing careers.

At Liverpool, he recalls fondly, Robsinson was quickly nicknamed “the Cat” an ironic reference to his agility levels (“the usual stupid player stuff,” laughs Lawrenson) but after having had a difficult time at Manchester City where he had struggled to live up the expectations that accompanied a very large transfer fee, he did well enough at Anfield despite starting many games on the bench.

“The thing about Robbo was that he made the best out of what he had. When he came to Liverpool he was behind Kenny, behind Rushy, those kinds of people but he was great at holding the ball up and getting the team up the pitch, that kind of stuff.

“He had some really good days too; I remember scoring a hat-trick down at West Ham but a lot of the time he did have to settle for coming on.

“He left for QPR the following season and after that, he carved out a really fantastic life for himself in Spain.”

The pair remained friendly despite, Lawrenson acknowledges, not seeing much of each of other as they pursued their media careers in different countries. “You kind of lose touch with people when they go abroad. I went to work for the BBC and he went to work for the telly in Spain. But I was over there for a game or two and I remember the last time we saw each other having a very late night out in Madrid.

“He was a bright boy, Michael, that’s for sure. He was successful as a presenter as well as being a pundit. That tells you that he had the intelligence to do that and he certainly had the chat....he could talk for Ireland and Spain.

“He would tell you himself that his Spanish wasn’t actually great but people really engaged with him because of the way that he talked to people. He was a nice guy.”