Ken Early: Luck will not always be on Solskjær's side 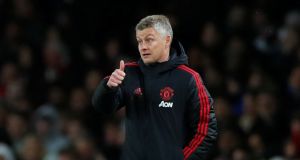 With his conscientious Scandinavian modesty, his get-on-with-it optimism and his apparent childlike love of the club, Ole Gunnar Solskjær could not have been more perfectly scripted as the anti-Mourinho. Photograph: Reuters/ Eddie Keogh

It has been a sensational three months for what the men who run Manchester United – Ed Woodward and Richard Arnold – like to call “the biggest TV show in the world”. The sixth season of the show had been one of the most troubled to date, with ratings in freefall and angry fans calling for the showrunners to be axed, but the inspired decision to kill off an unpopular central character to accommodate the surprise return of an old favourite has bewitched the world anew.

There’s a lot to like about the Ole’s At The Wheel story arc, with the sword-from-the-stone and return-of-the-king themes delivering archetypal resonance. With his conscientious Scandinavian modesty, his get-on-with-it optimism and his apparent childlike love of the club, Ole Gunnar Solskjær could not have been more perfectly scripted as the anti-Mourinho. Plainly willing to listen to the man he still calls “the boss”, his arrival has reconnected United with the glorious recent past from which they seemed to have been sundered.

At the Parc des Princes, he led United to their greatest night in Europe for more than a decade as the show’s sensational new direction took a turn for the supernatural. Solskjær’s team scored three times from 2½ attacks; in the stands the old legends were not to be outdone, as Patrice Evra chanted “Ici c’est Manchester” in the PSG directors’ box, while Eric Cantona reportedly taunted Neymar’s entourage.

A viral picture of the beaming Solskjær with Alex Ferguson and Cantona crystallised the impression that the old dominating United have returned from the grave. Maybe the last 5½ seasons were . . . only a dream?

At Arsenal Unai Emery must have been watching Solskjær’s start with a certain envy. Guys like him have to work twice as hard to earn half the praise. He too is charged with restoring ratings for a big production that seemed to have run out of ideas.

Progress has been slow and sometimes underwhelming, with the major drama of his first season provided by a low-key feud with his best-paid player, Mesut Özil. It would not really be true to say that Emery has blown everyone away with his first season at Arsenal.

And yet, when we compare the table today with how it looked after 30 matches last season, we see that Arsenal have gained 12 points and United have lost seven, a 19-point swing that has pushed Arsenal up to fourth, from sixth, and United down to fifth, from second. The euphoria over Solskjær’s appointment and dazzling start obscures the fact that his run of wins has so far only transformed a disastrous season into a merely worryingly bad one.

If United’s win in Paris suggested the hand of destiny at work, their 2-0 defeat at Arsenal unfolded as though destiny was having a joke at their expense, reversing the little details that had gone their way in the previous match.

Last Wednesday it was Gianluigi Buffon who had been deceived by the odd trajectory of Marcus Rashford’s knuckleball, last night it was David de Gea who failed to read the shape of Granit Xhaka’s snapshot. In Paris, United won thanks to a late VAR-assisted penalty, at Arsenal they were killed off by a late penalty that VAR might have chalked off. In football, random chance remains the real MVP.

The implication of the stat was clear: United can’t keep this up, a lot of things have been going their way, luck will not always be on their side, they will regress to the mean.

Perhaps the statistics miss something important about how Solskjær has restored some of the swaggering arrogance, the sense of confidence in their own superiority, that characterised the Ferguson teams.

The fretful David Moyes could not pull this off. Louis van Gaal didn’t lack arrogance but his reprogramming of the team was perhaps too fundamental; his players ended up feeling like junior students of the game rather than hardened winners. Mourinho’s tactics required them to approach every big game as though they were hopelessly outclassed underdogs.

Under Solskjær there has been the sense of psychological unblocking, of rediscovery, of a group of players remembering that football can be fun, even if you happen to play for Manchester United.

The next challenge for Solskjær is to make sure that the best spell of his time in charge of Manchester United hasn’t already happened. Many of the problems that wrecked the first half of the season were solved when Mourinho walked out the door, but a few more complicated ones persist.

The first step to solving a problem is identifying that you have got a problem. Have Manchester United got a problem in Romelu Lukaku? Solskjær left Lukaku on the bench for most of his matches during the first few weeks, and the Belgian won back his regular starting slot only when Anthony Martial got injured in the first leg against PSG.

Lukaku responded with six goals in three matches against Crystal Palace, Southampton and PSG, but his wasteful display against Arsenal cost United badly in the race for the top four.

It was Lukaku who embraced and consoled the stricken Presnel Kimpembe at the final whistle in Paris. Lukaku knows all about the cruelty of football. In recent days he spoke about how a miss in the 2017 Super Cup final against Real Madrid damaged his standing with United fans as he tried to settle in to the club. He broods on such moments more than many top footballers do.

Last week he did a video with sponsors Puma, reading out “mean tweets” from fans. After scarcely concealing his irritation at these tweets – which by no means sounded like they had come from the meaner end of the spectrum – Lukaku declared: “You know what? You can love me or hate me, but look at my scoring record, I don’t need to say anything no more.”

The problem is that Lukaku’s record in big matches is poor: at United he’s scored one league goal in 18 games against top-six opponents. When he is confident, he is difficult to stop, but he isn’t always confident.

Solskjær has to decide whether this is good enough for Manchester United. Until now he’s been the restoration man – a reassuring arm around the shoulder, helping a bruised team to rediscover themselves and rebuild their shattered confidence. His players have responded brilliantly. The tricky part will be deciding which of them to cut.