Ken Early: Chelsea have no right to be doing so well 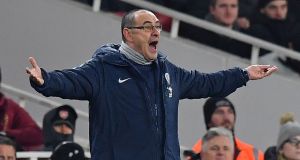 Chelsea’s Italian head coach Maurizio Sarri gestures on the touchline during his side’s 2-0 defeat to Arsenal at the Emirates Stadium. Photograph: Getty Images

The story is so familiar that it tells itself automatically: a manager stung by defeat turns on his players and accuses them of lacking the human qualities required to deliver success, his “rant” is picked apart and analysed by journalists and fans, former players unite to say that in their experience this sort of thing never works and why couldn’t the manager have kept the criticism behind closed doors? The manager seldom lasts beyond the end of the season.

Mauricio Sarri’s version of the story is a bit strange, for a couple of reasons. First, the “rant” wasn’t really a rant but rather a statement that was carefully calibrated enough that Sarri wanted to deliver it in Italian rather than risk making a mistake in English. Second, you wondered why he felt the situation had become so bad that such risky shock therapy was called for. All things considered, Chelsea have been having a very good season.

Remember that last season they could finish no higher than fifth, with the disillusioned manager Antonio Conte distinguishing himself as an unlikely source of acid commentary on their failings as a team and as a club. When Chelsea lost to Arsenal in the Carabão Cup this time last year, Conte explained: “It’s not simple, especially when on the bench the only substitute is Ross Barkley. ”

Mediocrity on the pitch was compounded by uncertainty off it. It was April when the first reports emerged that the Home Office was taking longer than usual to renew Roman Abramovich’s investor visa. On May 28th it was confirmed that Abramovich had taken Israeli citizenship instead, and three days later Chelsea announced that their long-mooted new stadium project had been indefinitely postponed.

In truth, Abramovich’s interest in Chelsea seems to have been on the wane since they won the Champions League in 2012, yet his departure would leave the club with a crisis of identity at least as significant as anything faced by post-Ferguson Manchester United.

In revenue terms Chelsea are well behind Arsenal and now that Tottenham are about to move into a new stadium of their own, they too will soon be making more money than Chelsea. Even with Abramovich still at the club, Chelsea are looking at the imminent prospect of slipping to third in the London power-rankings.

When Chelsea decided to bring in Sarri to replace Conte it was reasonable to expect a difficult season, as a squad that had been used to playing direct football adjusted to playing a technical passing game. Yet looking at the league table you see Chelsea in fourth place, three ahead of both Arsenal and Manchester United and still in touch with Tottenham, whose injuries are mounting. When you look at what has happened at the club over the last 12 months, they have no right to be in such a good position.

Chelsea have lost several experienced senior players – Diego Costa, Nemanja Matic, Thibaut Courtois, Cesc Fábregas – while making a string of signings that have failed: Álvaro Morata, Tiémoué Bakayoko, Danny Drinkwater, Davide Zappacosta, Emerson, Ross Barkley, etc. Every year also sees scores of lower-profile arrivals and departures, creating a strange air of flux around the club; you can imagine the individual players wondering: are we part of a football club here or some kind of hedge fund?

In such circumstances it cannot be easy to persuade players to identify with the club and the team. Yet far from taking a long time to transmit his ideas to the players, Sarri had them playing, or at least enthusiastically aping, his Napoli style almost immediately. Jorginho slotted straight in at the base of midfield and instantly became the biggest ball-hogger the Premier League has ever seen. Against West Ham, he struck an astounding 180 passes.

Not that such domination of the ball was necessarily of much use to Chelsea: the final score that day was 0-0, which did make you wonder just what all this passing was supposed to be for. But that’s not the point. The point is that Chelsea hired Sarri to bring a certain style of play, and within a few weeks it was plain that he was already delivering on that front.

If that style, with its signature spells of aimless passing in midfield and painfully infrequent attacks, is increasingly leaving supporters wondering just why the club was so keen to embrace it, that is because Sarri doesn’t have the players in the squad to make it work yet. This has been particularly evident in attack, where Morata sank without trace, while Olivier Giroud might have made sense as a signing for a Conte team, but not a Sarri one.

Sarri’s solution was to ask Eden Hazard to play as a striker, as Dries Mertens, a player with some similar characteristics, had done so successfully for him at Napoli. The plan has not worked because Hazard does not really want to make it work.

“Dries is more of a striker than me, I am more like a playmaker,” Hazard said in December when asked if he felt he could emulate Mertens’ success in the central role. “Since I started football I like to come and touch the ball. Dries is not like this, he just wants to stay in the box. That’s why he scores a lot of goals.”

The promise of scoring more goals would have been enough to persuade a lot of forwards to go along with the plan, but Hazard would rather get more touches on the ball. This attitude both makes Hazard a good player to watch and explains why he will never post Cristiano Ronaldo numbers, despite being one of the few players who can rival Ronaldo for sheer quality.

It looks as though Sarri has secured the services of another former Napoli player, Gonzalo Higuaín, for the rest of the season, and even if it’s more than three years since Higuaín was at his peak, Sarri must be reasonably confident he can at least be better than Morata.

But he won’t have much time to strike up a productive partnership with Hazard because the Belgian seems likely to be joining Real Madrid in the summer. Hazard out, Higuaín in: that’s downward mobility, but that is where Chelsea are right now. In these circumstances, keeping them in fourth place would be a tremendous first-season success for Sarri.