Wasteful Man United brought back down to earth by Arsenal 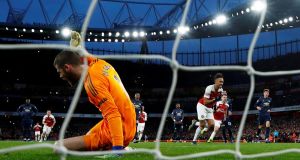 After the low point of Rennes, Arsenal reaquainted themselves with the winning feeling. After the euphoria of Paris, Manchester United tasted Premier League defeat for the first time under Ole Gunnar Solskjær. This topsy-turvey season continues to confound and, as the dust settled, the fight for places three and four in the top-flight table could not have been more tantalisingly poised.

Arsenal had been abject in the 3-1 defeat at Rennes on Thursday night – in the first-leg of the Europa League last 16 – but they found a way to maintain their imposing form at the Emirates Stadium. It was not a vintage display and they were grateful to the goalkeeper, Bernd Leno, at times but a Granit Xhaka goal – assisted by a rare David de Gea misjudgment – and a penalty from Pierre-Emerick Aubameyang were enough to propel them above United into fourth place.

Arsenal are now just one point behind third-placed Tottenham and, to paraphrase their supporters in stoppage-time, they are coming for their local rivals.

The stain on the afternoon was provided by the fan who ran on to the pitch after Aubameyang’s penalty conversion to celebrate with the Arsenal striker. As he sprinted past the United defender, Chris Smalling, he appeared to shove him and it was one of those moments when you wondered what was going through the man’s head and were thankful that nothing more serious happened.

United had arrived fresh from their Champions League miracle at Paris Saint-Germain and boasting a record of nine away wins from nine in all competitions under Solskjær. But they could not locate the groove that has driven the caretaker manager to the brink of a permanent appointment.

Unai Emery had rolled the dice with his starting Arsenal line-up, illustrating his preference for front-foot football in his home stadium. There were places for Aaron Ramsey and Mesut Özil in midfield – the latter in a roaming attacking role – and both Alexandre Lacazette and Aubameyang up front, as well. The last time Ramsey and Özil had started in the same team was September 29th.

Emery wanted to fight fire with fire and he enjoyed an early tonic when Xhaka scored his fourth goal of the season. The midfielder looked up, 25 yards from goal, and decided to try his luck, cutting across the ball with the outside of his left boot and summoning surprising power with the technique. It was the swerve, though, that did for De Gea. He did not see it coming. In fact, he was leaning towards his left and, when the ball began to fizz the other way, he could not react.

Solskjær had welcomed back Nemanja Matic from injury while Anthony Martial was fit enough to be used as a 70th minute substitute. The manager’s starting system was 4-4-2, with Diogo Dalot on the right of midfield and Paul Pogba jammed in on the left. It did not really work, and he soon tweaked to get Pogba into a more central role.

United hit the woodwork twice in the first-half and it was the first one, in the ninth minute, that felt like the wasted opportunity. Pogba combined with Luke Shaw and the left-back’s cross was made to measure for Romelu Lukaku. The striker had scored twice in each of his previous three games and tried to use the pace that was on the ball. The finish was not the cleanest, going down into the ground before rearing up and hitting the crossbar.

The second one was from Fred’s low curler from just outside the area on 19 minutes and it kissed the outside of the post. Leno looked to have had it covered. It did not quite come together for United in the first-half, although they were the more threatening team.

Marcus Rashford could not fashion a decisive far post touch following a Lukaku cross while Lukaku appeared to have rounded Leno after a burst beyond Nacho Monreal. The goalkeeper, though, snaked out an arm to thwart him. Rashford, too, was denied by an excellent Xhaka challenge.

United pushed hard upon the second-half restart and Arsenal were indebted to Leno for the preservation of their lead. He was out smartly to deal with Matic’s long ball ahead of Lukaku before he made another fine save to keep out the Unirted striker.

Fred had threaded the ball through for Lukaku, whose first touch was a little heavy, but he still managed to stretch and unload his shot. Leno, who was off his line swiftly, saved with his foot. In the first phase of the move, Laurent Koscielny had thrown himself in front of Fred’s shot.

Arsenal’s line-up did not feel configured to defend but they did so, with Sokratis Papastathopoulos and Koscielny catching the eye. Both central defenders put their bodies on the line.

The home side had started to flicker around the hour mark, with Aubameyang and Xhaka having sightings of goal before the penalty changed the complexion of the game. Lacazette had the position on Fred as he surged into the area and, when the United midfielder leaned into him, there was contact. Lacazette felt it in his back, down he went and the referee, Jon Moss, who had previously incensed the home crowd with a number of decisions, pointed to the spot.

Aubameyang had missed his previous penalty, against Spurs, which had been to win the game in the last-minute, and he went up the middle here, which felt risky. De Gea, though, had committed himself in the other direction – not for the first time – and the ball found its target. The pitch-invading fan provided a sour note but, at that point, Arsenal knew they had a grip on the points. Lacazette dragged wide after a Victor Lindelöf error and United’s misery was complete when Rashford headed tamely at Leno. – Guardian