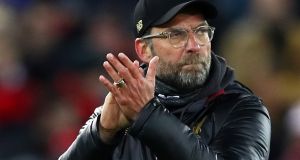 His message was that if City wanted to take back control of this title race the players were going to have to start speaking for him out on the pitch.

“At the same time, you send a message with the way they play,” he said on Friday. “Managers are sitting watching our games on TV and when they see how good we are, that is the best pressure. It’s not the points, it’s the way you play. That is what we have to try to do again.”

One possible flaw in Guardiola’s plan is that Jürgen Klopp says he’s not catching many of City’s games on TV these days. He said he’d miss City v Arsenal because it clashed with a Liverpool training session.

He had missed City’s defeat to Newcastle last Tuesday because when he saw City had gone 1-0 up in the first minute, he decided the evening would be better spent watching a movie with his wife.

If he had been watching, he might have been left thinking that Liverpool could really do with a match against Arsenal to settle their nerves, rather than tonight’s trip to West Ham.

Last week, Newcastle had been humble enough to dedicate themselves absolutely to the task of getting in City’s way. Arsenal are too proud to play like that; they want to take on their opponents in an open match.

City never get to play in this type of game any more because nearly every other Premier League team plays so defensively against them. After overcoming some initial jitters, they looked like they enjoyed it.

By the end even Guardiola seemed somewhat relaxed. To watch his sideline agonies during the first half against Arsenal and for most of the Newcastle match was to be reminded that success offers little insulation to a coach against these feelings of frustration and powerlessness. It anything, it looks like the more successful Guardiola becomes, the worse the anxiety gets.

Maybe the reason Guardiola dreads failure so much is that it so seldom happens to him. He has been involved in nine title races before this, winning seven of them.

The exceptions were 2012, when his Barcelona side finished second behind Real Madrid, and 2017, when Manchester City finished third in his first season in England. City were not the outstanding favourites to win the league that year, so 2012 remains the only time a Guardiola team has started the season as favourites to win the title, and failed to deliver.

Klopp is the one who is used to losing. In his career the triumphs are far outnumbered by the gut-wrenching defeats and disappointments. Guardiola has suffered a few stinging reverses in the Champions League, but that is failure of an extremely exalted type.

There is nothing in Guardiola’s career to compare with the dismal disappointments Klopp suffered in his first two seasons with Mainz, which both ended with his team failing to secure promotion to the top flight by messing it up on the last day. Lose a Champions League semi-final and it hurts. Lose a promotion-decider in the German second division and you might never be heard of again.

But Klopp kept going. Mainz were promoted in the third season. Dortmund missed out on Europe on the last day in his second season there, but came back to win the title in the third season. He has already had two huge disappointments with Liverpool, losing the Europa League final in 2016 and the Champions League final last year. In Klopp’s experience, that means they must be about ready to win something big.

Now he just has to convince everyone else. In Klopp’s time at Liverpool it has often been said that he is a good fit for the club in terms of his style and demeanour – an emotional manager for an emotional club.

But Klopp’s natural optimism would make him an oddity in the stands at Anfield, where the mood more often oscillates crazily between bullish overconfidence and depressive, paranoid fatalism, with slack-jawed interludes of glassy-eyed torpor. This explains why Klopp can so often be seen geeing up the crowd as though it were one of his players.

Everyone knows the history.

As Liverpool have been leading the league for the last few weeks, Klopp has found himself in several regular press conferences having to discuss statistical oddities, which usually take the form of “every team that has done X at this stage of the season has gone on to win the league – except Liverpool in such and such a year”.

The subtext is that Liverpool are a special case – an emotional basket case – and that this team like all the others over the last 29 years will be crushed by the weight of the curse.

After Liverpool drew with Leicester in an angsty atmosphere last Wednesday, Virgil van Dijk politely reminded the Liverpool supporters that the players out on the pitch could smell their fear and it wasn’t helping.

“You get that feeling as well from the crowd and I think it’s not really necessary at the moment. Everyone wants to win so bad and that’s what we want as well. But sometimes you need to be very patient.”

But you can only be patient if you believe that it will come good in the end and this is the leap of faith Liverpool’s supporters are struggling to make.