Guardiola implores match winner Mahrez to be ready to pounce 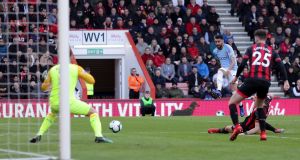 Winger Mahrez ended a three-month Premier League goal drought at the Vitality Stadium by stepping off the bench to fire the champions back to the top of the table.

The Algeria international has made only 11 top-flight starts since his £60 million (€73 million) switch to the Etihad Stadium last summer and been restricted to just 124 minutes of league action in 2019.

He was unexpectedly thrust into Saturday’s game during first-half stoppage due to an injury to Kevin De Bruyne and capitalised by securing a 1-0 win with a low finish in the 55th minute.

“It’s so important for him. Firstly, for the team,” said Guardiola.

“I don’t have any doubts about his quality and always his mentality is aggressive.

“But he has to understand where he is, [which] is at a team who scored 100 points [last season] and in every single game fight and run and play.

“And the people in front are Leroy [Sané] – last season one of the most important players that we had – Bernardo [Silva], the best player in the league, and Raheem [Sterling].”

City enjoyed 82 per cent possession on the south coast and won having prevented Bournemouth registering a shot at goal.

The victory pushed Guardiola’s side two points clear of title rivals Liverpool, before the 0-0 draw in Sunday’s Merseyside derby reduced their lead to a single point.

However, the success was tempered by De Bruyne’s hamstring injury and a recurrence of a groin problem for England defender John Stones.

Guardiola must wait to discover the extent of those problems but fears Belgium midfielder De Bruyne may be “out for a while”, although he said Stones was substituted as a “precaution”.

Mid-table Bournemouth saw their winless run to stretch to five games and have now been beaten home and away by both Liverpool and City.

Asked who he fancied for the title, Cherries boss Eddie Howe said: “Very difficult to call, I wouldn’t like to say one way or the other.

“I think they are different teams, different styles of play.

“But I think the common thing between both teams is they both have match-winners – at the right end of the pitch they’ve got those difference-makers.”