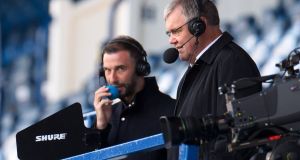 Clive Tyldesley commentating on the Scottish Premiership match between Rangers and St Mirren at Ibrox in August. Photograph: Willie Vass/Pool via Getty Images 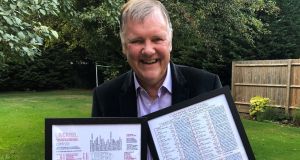 Clive Tyldesley with two of his commentary charts, which he sells online.

Clive Tyldesley is synonymous with probably every football fan’s childhood and even adulthood. So when we caught up over Zoom to discuss life, commentary, his new book and his latest venture Commentary Charts, it was incredible to listen to a childhood hero relay all the magical moments he once narrated to us. But first, a story about how Tyldesley ended up in Ballybofey in the 1970s.

The game was Finn Harps against Everton, a Uefa Cup first-round tie on Tuesday, September 12th, 1978. Tyldesley was working with Merseyside radio and had visited Donegal before on a couple of golf trips. “I did get the impression that whilst everybody was very, very warming and welcoming, there was a feeling that Dublin had forgotten about them about 50 years ago, they gravitated more to Derry maybe more than Dublin. We’re talking about the height of the troubles, and an English football team could not fly to Belfast and then drive on to Ballybofey. It just wasn’t allowed.

“We flew to Dublin and, of course, pretty much pre-worldwide web days, me gaining any kind of information on Finn Harps for my commentary chart on that particular game was difficult.

“Still, I’d managed, through a few phone calls and stuff, to get a certain amount of information, but when we arrived at Dublin airport for this coach journey up through the middle of Ireland, through the North, we were met by Fran Fields, the president of the club, who was a very well-known man in Irish football. He was just the most charming advert and archetypal Irish host that you could ever wish to meet. I introduced myself before we got on the coach and he said: ‘No worries, you sit next to me, and I’ll tell you anything you need to know about Finn Harps and any of the players on the way up.’”

What Tyldesley wasn’t aware of at that time was Fields had pretty much exaggerated the players’ achievements. “We’d started with the goalkeeper. He said, ‘Yes, he was in the Irish squad last year.’ Well, I didn’t know that he had been called up. I got all this information together. On the day of the game, the following day, I went down to the stadium to look at our commentary position and I met a local journalist.”

Funnily enough for Tyldesley, it was only a few hours before the game and his commentary chart wasn’t as well researched as he’d hoped. Everton went on to win 5-0.

Our conversation drifts in and out of various subjects, but, Roy Keane comes up quite frequently. Tyldesley admits there was zero relationship with Keane during his playing days.

“He was one of the players that I most feared interviewing after a game. He was difficult and awkward and pretty dismissive,” he explains, but once Keane noticed how much work Tyldesley put into his commentary charts and the level of detail needed, a bond started to form.

“I think once he saw the amount of preparation that I make for a live broadcast, he identified with his own preparation for a football match. Roy would tell you, that in the days leading up to an Arsenal game, the Manchester United-Arsenal game, he would be playing that game from Wednesday onwards.

“Everybody around him, including his wife who is absolutely lovely, would have to live with that Roy Keane, and his team-mates also. He is continually self-analysing, and I like that about anybody. He has a certainty about some opinions, but they can be shaken. He’ll listen. He’ll listen as much as he talks. There are more layers to Roy Keane than we ever saw as a player. Certainly, more than I ever saw as a player.”

The word ‘professionalism’ comes up time and time again. I point out that the Irish squad under Keane and Martin O’Neill eventually became weary of the extra professionalism tags. Tyldesley has some views about that.

“I don’t think we parent like we did in 1975. You certainly can’t manage like you did in 1975, you can’t manage an office space, an accountancy firm like you did in 1975. We all remember teachers and maybe bosses in our early life who were bullies. I’m not blinkered enough to believe that that style of management has gone away, but, we’ve evolved, we develop and management styles, whether it is accountancy firms or football dressingroom.

“We have got to adapt to different attitudes, different diversity, a different mix of personalities and nationalities and cultures in a football dressingroom, and different approaches to tactics, towards motivation, more awareness of potential mental health problems or probably more sensitivity to the rest of the life of the player, whether he’s got an ailing parent or a difficult marriage or a problem child or whatever. I think football management and all kinds of management, some of the blankets have come off and we manage differently.”

Commentary has become an ever-changing source of match reportage. From Jim Nantz using silence to let Tiger Woods do his thing to the conversationalist tone now undertaken. Tyldesley, a self-confessed student of commentary, has a few thoughts on these.

“Your commentary to your grandmother is as important as the best-qualified coach that is watching, so commentate to her. Therefore, you won’t be talking over her head . . . These people have welcomed you into their homes or onto their commute. Don’t make them feel like the kid in the back row of the maths class. Be welcoming, be inclusive.”

Tyldesley expresses his dislike for the conversationalist tone. “You may have a personality, and I may like you more than other commentators, but I’ve still turned on for the football, and I can turn you down and so, I think there’s streams of consciousness that you hear in a lot of commentaries are I will just saying a little self-indulgent and are not fulfilling your main role which is to recognise your audience and serve them.”

And as far as silence goes? “Reg [Reginald Gutteridge, boxing commentator] used to say to me, silence is great in commentary, in television commentary, obviously. He said, but it’s not a rest, it’s thinking time, use the silences. You should be concentrating even harder during the period when you’re not talking to try to choose the words that will capture the next moment. He was very big on vocabulary, not poetic vocabulary because it’s not a poem. It is a piece of reportage.”

1 Level 5 golf shutdown: Ireland one of few countries to close courses
2 Dan Martin toasting another stage win at the Vuelta
3 Disappointment and frustration par for the courses as golf goes into lockdown
4 Shock at golf clubs as sport faces shutdown in Level 5
5 Kerry v Donegal brought forward to facilitate marathon journey
Real news has value SUBSCRIBE
Crossword Get access to over 6,000 interactive crosswords