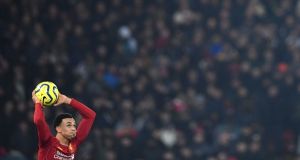 During the scorching summer of 2018, Thomas Grønnemark received a call while touring the Danish countryside with his wife and their two children.

He noticed the caller ID on the screen was a +44 number but he was preoccupied with driving and, as the sole proprietor of a registered business, he was quite used to receiving calls from people selling everything from accounting programmes to pension schemes. So Grønnemark let the call die out. When the family stopped at the organic chocolate shop in Knebel, he listened to his voicemail.

The person behind the British phone number was none other than Jürgen Klopp, and Liverpool’s manager asked him to call back. Grønnemark wasted no time in doing so but couldn’t get through, and so he continued his journey home to Skive. His phone rang not long after.

“My wife looked at the display, because I was driving the car, and she said: ‘It’s Jürgen!’ I pulled the car over in the nearest grass field to speak to Jürgen Klopp. He told me that Liverpool had had a fantastic 17-18 season, coming in fourth in the Premier League and reaching the Champions League final. But they had lost the ball almost every time they had had a throw-in.

“He invited me to Melwood, Liverpool’s training ground, the following week, and naturally I agreed. It was actually just meant to be a meeting, but he was so convinced I could help them they had me coaching the Premier League players the following day. I’ve coached Liverpool FC ever since.”

Grønnemark is a throw-in coach, possibly the only one of his kind, and Klopp had read about his expertise in the German magazine Sport Bild. The Dane had given an interview, in which he spoke of how the Borussia Mönchengladbach left-back Andreas Poulsen had improved his long throw by 14 metres under his supervision. Grønnemark has a varied background in sport: he was a sprinter for Denmark and a brakeman on the bobsleigh team that met the international requirements for the 2006 Winter Olympics but wasn’t selected to compete. He is probably best known, though, for setting a world-record long throw.

The record was achieved in 2010 when he used a front flip to propel the ball 51.33 metres across some pitches in Horsens. The long throw is what people want to talk about when they ask about his work, but coaching throw-ins is about so much more, he points out. “I work with the long, the fast and the clever throw-in. And that goes for the entire field. I’ve coached some teams that only wanted to practise long throws close to the opponent’s goal, but my philosophy is to practice across the entire field. And Liverpool is the first team to really enjoy the benefits of this philosophy.

“You could say that I coach intelligence when it comes to throw-ins. And I’m not afraid to say that most professional players possess very little intelligence in this respect – and among amateurs and young players it tends to be even worse; 99 per cent of the professional players and coaches I’m in contact with have never practised throw-ins, and those that have, have not practised at a particularly high level.”

Players need to learn the technique required to throw long and with precision, but also to create space to receive the ball. The aim is to create chances and ultimately goals, which is why the throw-in coach involves every player in his training. “If you watch a Liverpool match, there are usually six or seven different players who do the throw-ins,” Grønnemark says. “If Salah is closest to the ball, he should go ahead and do the throw-in, but only if it makes sense. However, it can be a disadvantage to take the throw-in too fast. The worst thing you can do is to take the throw-in fast in a pressure zone. When I analyse throw-ins, I look at whether we’re able to play our way out of the pressure from our opponent. We might do something amazing based on a throw-in, but that isn’t good enough for me if we lose the ball.”

Klopp contacted Grønnemark after a season in which Liverpool’s statistics on throw-ins under pressure were the third-worst in the Premier League with a success rate of 45.4 per cent, according to Tifo Football. After Grønnemark had worked with the team for a season, Liverpool ranked as the second-best team in Europe within the same parameters, on 68.4 per cent. They were second only to FC Midtjylland, who also work with Grønnemark.

It has been amazing to coach a big team like Liverpool and help win the Champions League and Premier League, but my biggest dream is to help change football, so throw-ins are taken more seriously"

Apart from Liverpool and several Danish teams, Grønnemark has been employed by clubs such as RB Leipzig, Ajax and Gent. Last season he coached throw-ins at eight clubs. He usually visits each team six or seven times a year, with two to four days of training per visit. In addition, he conducts a video analysis of all their matches. He singles out Liverpool’s Andy Robertson and Trent Alexander-Arnold as the best throwers in modern football.

“I’ve coached a lot of players who have improved the length of their throws with the help of technical training. When I started working with Kian Hansen [now of Nordsjælland], he could throw 30 metres, which is pretty far, but the throw was very high and easy to defend against. He ultimately reached 36.7 metres but throwing at incredible speed. I believe he assisted every one of the 35 goals that FC Midtjylland scored after throw-ins in the next four seasons.

“A completely different case is Andy Robertson from Liverpool, who couldn’t throw past 19 metres when I met him. That is very, very short, and when you throw that short, it’s very, very easy to put that throw under pressure. He managed to extend his throw by nearly eight metres. And although he’ll never have the longest throw, with training we’ve managed to improve the radius of his throw-in by more than 500 square metres.

“This means he can throw to more players. He improved incredibly fast – tactically, too, in terms of when to take the throw fast and when to hold on to the ball. When is the space created? He’s very good at precision. Trent has reached just about the same level, but it took him a little longer. In my eyes, they are the best all-round throwers in the world.”

Grønnemark is reluctant to highlight specifics from matches where his teams have excelled at a thrown-in they have practised. “I’m the only one in the world with such in-depth knowledge of throw-ins. Which is actually a pretty big deal, when you think about it, because football is a 140-year-old sport. Until I release the book I’m working on, I’ll keep my secrets to myself.”

Grønnemark has extended his contract for another season with Liverpool and selects his clients carefully. “I don’t want to coach teams that compete with Liverpool at the top, and I don’t want to coach teams that have a historical rivalry. For instance, coaching Liverpool and Manchester United in the same season wouldn’t work. I’ve had several offers from top teams in the Premier League that I’ve turned down – including in this season. Liverpool isn’t holding me back. My own ethics are.”

He dreams of adding a national team to his portfolio. “Especially one attending the World Cup, which is very special. It has been amazing to coach a big team like Liverpool and help win the Champions League and Premier League, but my biggest dream is to help change football, so throw-ins are taken more seriously.”

Grønnemark started as a throw-in coach in 2004 but his international breakthrough came only after he tweeted about his work with Poulsen. That was picked up by one of the Gladbach fansites, which resulted in an interview with Sport Bild. That article was read by Klopp and Ralf Rangnick at Leipzig. “If you’re proactive and get things moving,” he says, “a little tweet could change your life.” - Guardian