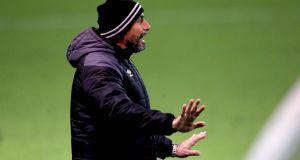 Dundalk have won all three of their matches under new manager Filippo Giovagnoli. File photograph: Inpho

Dundalk manager Filippo Giovagnoli is confident that his side will rise to the challenge in the breakaway territory of Transnistria on Thursday night with the Italian insisting they will produce their best form against a strong Sheriff Tiraspol team.

“They have good players, really good,” he says of a squad that is littered with senior internationals, “so, let’s be honest, we have a big challenge, a big task ahead of us.

“But we are ready to perform. We are excited and we’re going to perform tomorrow, trust me,” says the Italian whose side have won the three games it has played since his arrival a month ago.

Giovagnoli is without Andy Boyle, who was sent off in last week’s win in Andorra, and Dane Massey, who is battling to play again this season after having undergone surgery on a thigh muscle injury and so must make calls in defence where Sean Gannon could return.

The manager though still believes his side is capable of progressing, and then pushing on towards the group stage against either KI Klaksvik or Dinamo Tbilisi in the next round. That’s if they can play to their full potential:

“Why not? Of course we have always to perform and we have to perform at the best level we can. We can’t go to games and just be there and not perform. But if we perform at the highest level, I think we can be in the group stage, yes, I believe so.”

Sheriff, who have qualified for the group stages of the competition four times themselves and are utterly dominant in the Moldovan league where they are already well on the way to another title just 10 games into the season, will present a major challenge but, Giovagnoli insists, Dundalk will be ready.

“The thing is, you have to be organised and prevent the counter attack. This is what we are working on. There is a lot to do, a lot to do for sure and a lot of improvement in front of us.

“But I’m confident,” he says. “I am really proud of what they (the players) are doing. When a new coach comes in and tries to implement a bit of a different style, a little bit of different belief and a different way to train and the players respond so fast, and so well of what you have asked, you can only be proud of them.”

1 Level 5 golf shutdown: Ireland one of few countries to close courses
2 Shock at golf clubs as sport faces shutdown in Level 5
3 Dan Martin toasting another stage win at the Vuelta
4 Philip Reid: Hard to find the sense in closing golf clubs
5 Ken Early: Like Napoleon, Mourinho is the outsider always trying to prove himself
Real news has value SUBSCRIBE
Crossword Get access to over 6,000 interactive crosswords