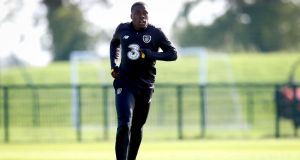 Michael Obafemi has an opportunity to prove himself to Ireland senior manager Stephen Kenny on Tuesday night with the Under-21s in Italy. File photograph: Inpho

While Stephen Kenny was trying to get through another busy day of coronavirus activity around the senior squad, his former assistant with the under-21s, Jim Crawford, was scrambling about on Monday for information on a team he hadn’t realised his side would be playing when they left for a key European Championship qualifier in Italy last Friday.

The hosts have been hit by a string of positive tests and Crawford admitted on Monday morning that he had no idea whether they would try to keep on trying to replace the players they lost or simply bump up the under-20s for the game. Within a couple of hours the federation went for the latter option, although they have asked Uefa for permission to take four players from the affected squad for a game they too need to win.

Their under-20s had, as it happens, been together for an invitation tournament over the weekend and their coach, Alberto Ballini, will take charge of the team for the evening (kick-off 4pm Irish time). His squad includes Lorenzo Colombo, who was on the bench for AC Milan when they played Shamrock Rovers in Tallaght recently and Daniel Maldini, son of the club’s much revered defender Paolo.

Sandro Tonali, who started the Europa League game in Dublin, is one of the four under-21s expected to feature after having tested negative multiple times for Covid-19.

Crawford has lost Dara O’Shea and Jason Knight to the senior squad because of all the problems there but he has, he insists, no problems going into the game with the group he has at his disposal.

“I think the seniors are the biggest show in town,” he says, “and with them having three games in a window, you’re always expecting that phone call to tell you that they need to draft in somebody.

“About the only thing that I know for certain is that there’s a lot of quality here so I’ve no fears playing any 11 of the squad I have. We have players capable of going out and putting on a really good performance.”

With Iceland at home and Luxembourg to come for Ireland next month, the Italians currently trail Crawford’s side by three points in the group but have a game in hand. Sweden and Iceland are both a point further back.

The nine group winners and five best runners-up all qualify for the finals, something Ireland has never done at this level. Their hosts, who have been European champions five times, have only failed to qualify twice.

Senior international Michael Obafemi is part of the Irish squad and his Southampton club-mate Will Smallbone is in contention to make his international debut at this level in the game.