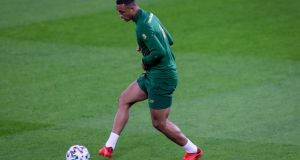 Ireland’s Adam Idah at training in Bratislava the day before the Euro 2020 playoff against Slovakia. Photo: Tommy Dickson/Inpho

The FAI is to review the events of last week that left Stephen Kenny short of seven players for yesterday’s drawn Nations League game with Wales although the more immediate concern is who exactly will be available to the manager for the game in Finland after the next round of Covid-19 test results are returned to the association on Monday.

Having lost two players before the crucial play-off game in Bratislava, Kenny was left without a further five late on Saturday, something that forced him into selecting a new starting line-up to face Ryan Giggs’ side and leaving empty places on the bench.

The Dubliner acknowledged afterwards that it has been a “difficult” build-up to what was only his fourth game in charge but insisted that his problems “paled into insignificance,” when compared with the players affected – Alan Browne, John Egan, Callum O’Dowda, Callum Robinson and Derrick Williams – with one having actually tested positive and the rest deemed to have been close contacts.

The ongoing uncertainty of all of this was underlined by the news that the staff member who had tested positive in Bratislava has since had two negative tests, something that paved the way for the return of Adam Idah who was last night recalled to the squad along with Dara O’Shea and Jason Knight from the Under-21s as well as Ryan Manning and Ronan Curtis.

Aaron Connolly does not return, pefhaps because of reservations on the part of his club and David McGoldrick has also returned to his club.

The interim FAI CEO Gary Owens pointed out that for all the focus there had been on the fact that Connolly and Idah had been ruled out because they were sitting in the wrong seats and so ended up being close to a member of staff, the consequences of a player coming down with coronavirus had had a bigger impact on the numbers.

“With hindsight I think we need to think about where people sit on the plane and review it. We had four players out [against Wales] due to the players sitting together but we will review everything.”

Owens said the association would sit down with all parties in an effort to review the protocols as they currently stand but suggested that, on the basis of the last few days, he would not be inclined to sit the entire squad together on a flight again.

Distancing while up in the air, he suggested however, is pretty much impossible to address in the way that would be required to prevent any issues arising.

“The reality is that there were 53 on the plane,” he said. “But if we followed the guidelines we would need four planes. We would have only been able to put 16 people on the plane.

“It would be a huge burden on international teams if you had to comply with the two-metre rule on the plane. I’m not sure if that is financially sustainable. That needs to be fed into the Uefa review and the HSE.”

Owens acknowledged that Uefa having to postpone all of next month’s games is a possibility if the pandemic continues to impact on international sides across the continent in the way it has so far through the current window.

And when the notion was put to Kenny he accepted that “there are serious challenges and a lot of anxiety with a lot of the clubs so I’m sure it’s something for everyone to consider”.

On this occasion, though, the manager said he was just happy with the way everyone had coped in the circumstances.

“We had to change a lot of stuff today but the players’ attitude was just brilliant, they showed their professionalism by performing to the level they did.”

Kenny said the team had not been able to pose the attacking threat he would have wanted but, he said: “We lost three centre halves today, two in the morning and then Kevin Long after a short period of the game. But Matt Doherty came in and did brilliantly there. It shows there’s a bit of depth to what we are doing.”

Having ended his international break with a fairly frank assessment of the way he and the other players needed to adapt to the new manager’s demands, Shane Duffy was more upbeat here although there was no glossing over the fact that the lack of goals is still a major issue.

“Listen, we’re here for results and we’ve not got the wins we wanted,” said the Irish captain. “It’s frustrating. I felt we could have won all four games under the manager and we haven’t won any. But it’s not for the lack of trying.

“It is frustrating that we’re not putting away chances but it’s better than getting no chances. The performance are there, we just need to start getting the results as well.”