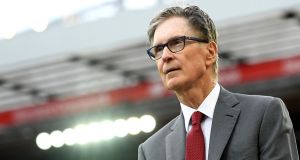 Liverpool owner John W Henry is said to have been contemplating the great crack in the English football pyramid for years. File photograph: Getty Images

There are so many extraordinary elements in the Liverpool and Manchester United proposals to reshape English football, and so much understandable scepticism, that the historic move at the heart of it is in danger of being missed.

So, for clarity, it really is true that the US owners of these two fabulously rich football corporations have produced an offer that has not been forthcoming and never seemed possible from any Premier League leadership figures for 28 years.

There are, undoubtedly, some self-serving elements to their prospectus but by far the most significant is the proposal that the Premier League should share a net 25 per cent of its future TV deals with the English Football League, and provide £250m immediately to help the 72 EFL clubs through their financial crisis.

That is an offer, finally after a generation, to rejoin the top division with the three below and repair the vast, calamitous financial gap caused by the breakaway of the First Division from the Football League to form the Premier League in 1992.

The wholly negative reaction of the British government to this plan for huge financial reparations, which also includes increased money for the FA and grassroots good causes – approximately 8.5 per cent of annual net Premier League TV money – seems bizarre.

For months throughout this pandemic and its financial crisis for the game and its cherished pyramid, the British culture secretary, Oliver Dowden, has been urging the Premier League to use its financial might to help the “football family”.

The Premier League has dithered, delayed and produced nothing solid, despite being told in the spring the EFL had an immediate £250m hole and that many clubs face ruin through a Covid-19 winter of matches in empty grounds. Steve Parish, the chairman of Crystal Palace, recently argued that “Premier League clubs are being unfairly singled out” and should not have to share their money.

“No other industry is asking firms to bail out competitors,” Parish wrote in the Sunday Times before offering some comparisons. “The supermarkets aren’t instructed to help the corner shops. Deliveroo aren’t bailing out your local cafe.”

Quite apart from the assumption that Selhurst Park counts as a supermarket among corner shops, these are dreary arguments that do not merit earnest engagement. It is the kind of reasoning, for the maintenance of inequality, that also makes it more difficult for the Premier League’s middling clubs to be outraged about Liverpool, United and the rest of the big six looking to cement their own power.

With these proposals, United and Liverpool, whose majority owner, John W Henry, is said to have been contemplating the great crack in the English football pyramid for years, have thumped through the last months of stagnation and presented a coming together that has not seemed possible for 25 years.

The idea of the EFL having anything like a 25 per cent share of Premier League TV deals last disappeared in the dust in 1995, when with Rick Parry as the chief executive, the top flight did offer 20 per cent but the Football League board, to the fury of many clubs, rejected it.

When Parry took on the chairmanship of the EFL only one extremely long year ago, he appreciated that the root cause of the 72 clubs’ various financial agonies is the eye-watering gap with the Premier League and the parachute payments that further distort the landscape in the Championship.

When he has spoken up and made that plain, including calling parachute payments “an evil that needs to be eradicated”, he has generally been patronised. The Premier League’s administrators and smaller clubs seem to have been proceeding on the basis they would not be seriously pressured into sharing their money more equitably, as they haven’t for the past quarter-century.

To be fair, nobody except Parry seems to have been aware that Henry, across the Atlantic, was informing himself about all of this, apparently becoming more knowledgeable about the bitter 1992 breakaway than many English football people who really should know that history better.

And of all people who could be expected to support the idea of putting the game back together, it turns out to be Joel Glazer, of the family whose £525m debt-loading, 2005 takeover of United has been such a burden at Old Trafford and caused so much rancour and unhappiness.

Of course it is also true this proposal does not come without some pain but that Henry and Glazer do not envisage feeling any of it themselves. There is a planned consolidation of voting power within the Premier League of the big six plus the three outside clubs that have been in the top flight longest, Everton, Southampton and West Ham, and that is simply not a good look. The 25 per cent for the EFL is mostly to be found by reducing the Premier League to 18 clubs – the original 1990 FA proposal that was never implemented – and scrapping parachute payments, rather than ceding the money out of Old Trafford or Anfield revenues.

United and Liverpool envisage their time being freed for more Champions League matches, which will happen anyway from 2024 when Uefa’s competition is inevitably expanded, and lucrative pre-season tours. They insist their proposals are not an effort to seize more of the Premier League TV money but it is likely other Premier League clubs will get less. It will make it more difficult to break into the top six; the more even competition will be created in the relegation zone.

So, quite rightly, there should be a battle over the detail of these proposals. If the other 14 Premier League clubs want to fight for the maintenance of the one club, one vote system that is understandable; most football people would agree with it.

But the heart of the plan should not be swept off the table, which is for the Premier League to finally reconnect with the EFL, mend the gap and ease the senseless worry that loved and historic clubs will go bust in the time of football’s greatest boom. - Guardian