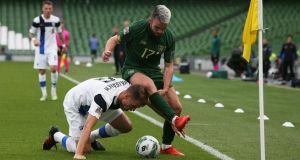 Brighton striker Aaron Connolly has rejoined the Ireland squad after Brighton and Hove Albion apparently relaxed its opposition to him being involved in the Nations League game against Finland.

It is understood that the Premier League outfit wanted the 20 year-old, who withdrew from last Thursday’s Euro2021 playoff after he had been deemed a close contact of a staff member who had tested positive for Covid-19, to skip the trip.

When it was announced on Sunday evening, however, that the other player affected by what turned out to be a false positive test result in Bratislava, Adam Idah, was returning to the squad along with four other players - Dara O’Shea, Jason Knight, Ryan Manning and Ronan Curtis - Connolly made it clear on social media that he wanted to be involved too.

In what is clearly a boost for manager Stephen Kenny at a time when he is without the likes of David McGoldrick, Callum Robinson or Callum O’Dowda, the striker has now got his wish and linked up with the squad in Dublin ahead of the squad’s flight on Tuesday.