Dominic Calvert-Lewin scores on debut as England ease past Wales 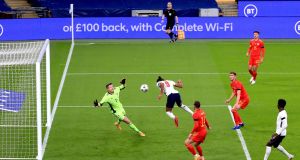 Dominic Calvert-Lewin marked his England debut with a goal as Gareth Southgate’s experimental side beat a much-changed Wales in a friendly at an empty Wembley.

Despite this being a rare meeting of two old rivals, both teams clearly had more than one eye on their upcoming respective Nations League fixtures.

Bukayo Saka also made his senior debut as Everton striker Calvert-Lewin was named in attack, heading England ahead before Conor Coady and Danny Ings added their first England goals to secure a 3-0 win.

Jack Grealish shone on his first start, building on his fine display in Aston Villa’s thrashing of Liverpool at the weekend to stake his claim for a permanent place in the side.

This was England’s most inexperienced starting line-up in 40 years and had a combined 54 caps, one fewer than Liverpool skipper Jordan Henderson, who was among the substitutes.

In fact, the side named by Gareth Southgate had more combined appearances in the EFL than they have in the Premier League.

Originally pencilled in as a fixture which would usher in a number of supporters before the Covid rules changed, this was England’s first home game in 11 months.

Belgium, the number one ranked team in the world travel to Wembley on Sunday afternoon for a Nations League game which will see Southgate recall the likes of Harry Kane and Harry Maguire.

Wales boss Ryan Giggs also rested key men as he continues to put his faith in the young talent being produced. They now travel to Dublin for a meeting with Stephen Kenny’s Ireland on Sunday afternoon in the Nations League.