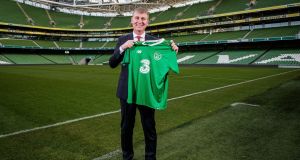 Stephen Kenny has been announced as the new Ireland manager with immediate effect. Photograph: Ryan Byrne/Inpho 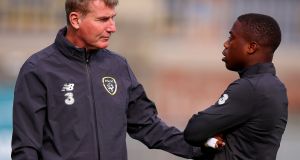 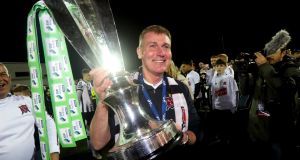 Whatever else you can say about the rise of Stephen Kenny to the role of full-time Republic of Ireland manager, none of it could ever have been described as inevitable. The bare bones of it tell of a guy who took over his first club at just 27 years of age, who brought European football to Longford of all places and who must, therefore, have been a prodigy. But though he has had a career in which success has almost always been a feature, the road to this point never looked particularly straight.

True, there were trophies at most stops along the way. Five Premier League titles, split 4-1 between Dundalk and Bohemians. Three FAI Cups, a first division title with Derry, even a Scottish Cup runners-up medal during an otherwise fruitless spell with Dunfermline. There have been European campaigns that frequently finished at least one stage further than expected and his Ireland Under-21s have been a tonic in a dark, bad time.

And yet, despite all that, it still feels like something of a happy accident that Kenny has made it to the top job. Not because he doesn’t deserve it - he undoubtedly does. More because he’s the sort of appointment the FAI haven’t been used to making.

Stephen Kenny doesn’t have the playing career of Steve Staunton or Mick McCarthy. He isn’t flashy or loud like Giovanni Trapattoni and he isn’t an anecdote factory like Brian Kerr. He won’t try to hammer a joke to death like Martin O’Neill. An unavoidable element of celebrity has been attached or applied to the role in the past three decades – this appointment comes with none of that.

The new manager has a deliberate, thoughtful and disarmingly quiet presence to him that can take a bit of getting used to at first. The verve and brio of how his teams play can sometimes seem at odds with his public appearances. That said, he wouldn’t be the first manager to keep the important bits of himself back for when it really matters.

“I never had a concern about that,” he told The Irish Times a few years back. “I had an underlying confidence. You’re right, just because I articulate things in quiet and understated manner in public, people might think that’s how I am all the time. But behind the dressingroom door, I would be quite different.

“I don’t have that sort of natural aggression of someone like a Dermot Keely. So how do I deal with that? What do I do? I’m aware of that and always have been. I don’t think I lack passion, I wouldn’t say that at all. I get myself into a frame of mind for every game.”

Kenny’s exploits with Dundalk through the back half of the 2010s are ultimately what have positioned him for this job. Four league titles in five seasons, a couple of FAI Cups and an unforgettable run in the Europa League raised his profile and caused him to be taken seriously by the FAI.

Apart from the various on-field successes, it helped that he was consistently outspoken in his stance on how the game should be played. He has long seethed at the idea that Ireland have to play caveman football and that it’s somehow in the DNA of the game here to not keep the ball and played a possession-based style. He has been true to his word with what seems to be a particularly fruitful crop of under-21s and now he gets his chance to put the same sort of stamp on the senior team.

In these dark times, who wouldn’t be excited by such a prospect?