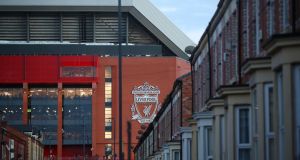 Liverpool have placed some non-playing staff on forlough, meaning the government will pay 80% of their wages. Photograph: Julian Finney/Getty

Liverpool have placed some non-playing staff on furlough as the Premier League remains suspended due to the ongoing coronavirus pandemic.

Around 200 staff, whose work is effectively idle during the Premier League suspension, have been furloughed as the league leaders join Newcastle, Tottenham, Bournemouth and Norwich in turning to the government’s job retention scheme.

Liverpool, who in February announced pre-tax profits of £42million for 2018-19, will top up the public money received from the government to ensure the affected staff receive their full salaries.

The announcement comes as Premier League clubs are meeting with representatives of players and managers to discuss possible wage cuts for first-team staff.

A Liverpool club statement said: “The club have confirmed those staff will be paid 100 per cent of their salaries to ensure no member of staff is financially disadvantaged.

“Last month the club also confirmed that it would pay its matchday and non-matchday staff while the Premier League is suspended.”

In February, Liverpool published their accounts for 2018-19, showing turnover for the year was up £78million to £533million, though profits fell in relation to the previous year after a record £223million investment on players.