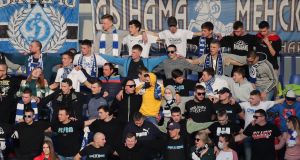 Most Spectacular Breaking of Pandemic Lockdown Rules: Alas, there were quite a few contenders from the footballing world, but we’ll go with Tim Payne, the New Zealand international currently on the books of Wellington Phoenix.

Wellington compete in the Australian A-League so the squad had been self-isolating at the Sydney Academy of Sport. How bored was Tim? Well, he nicked a golf cart from the Academy and, with team-mate Oliver Sail as a passenger, drove it down a busy Sydney road at one in the morning while both topless and drunk.

He was arrested by New South Wales police, breathalysed and charged. He’s due in court in June and faces a maximum of nine months in prison, as well as a hefty fine from his club and a suspension from the A-League when it resumes. Apart from that, his pandemic is going well.

“When Boris said we were in isolation, my first fear was for Gary Neville’s wife. How is she gonna cope with him?” - Jamie Carragher sending thoughts and prayers to Mrs Neville at this difficult time.

1000 - That’s how many tickets Brighton have promised NHS workers for future matches. The gist of the online response? ‘Haven’t they suffered enough?’ Tut.

Belarus, you might have heard, is the only one of the 55 Uefa member countries that has carried on merrily playing football through the pandemic, the head of their football federation, Vladimir Bazanov, at a loss to understand why their season should be postponed.

“For what reason should we not start it,” he asked Reuters when he spoke to them. “There is no critical situation. So we decided that we are starting the championship in a timely manner.”

Former Belarus international Alexander Hleb is a touch puzzled by this attitude, telling The Sun that “in Belarus, it’s like no one cares, it’s incredible. It’s very difficult to explain our country. All leagues have closed but we don’t seem to think it’s a problem. Why? I don’t know.”

The answer came from the country’s president, Alexander Lukashenko. “People are working in tractors, no one is talking about the virus. In the villages, the tractor will heal everyone. The fields heal everyone.” And to think they’re still looking for a vaccine.

“My kids have made a paddle to measure out two metres. They put a picture of my face on it. The motto is now: Stay a Crouch away.” - Peter’s loftiness is coming in handy.

“Simone dedicates his afternoons to our son, Lorenzo. They play football inside the house and have now smashed everything it is possible to smash.” - Gaia Lucariello on the price of having her husband, Lazio coach Simone Inzaghi, under her feet.

“They’re like caged animals. These are young, fit men who are used to an almost regimented way of living. All of that is gone. Some of them will be cooking for themselves for the first time in their lives.” - Neil Lennon frets about his Celtic lads turning in to a bunch of Jamie Olivers.

Pele in the third person

Referring to yourself in the third person is never a good thing, but if you’re Pele it’s probably forgivable. So, on the subject of the greatest footballers of all time? “I think Pele was better than all of them. Why? Because everybody keeps comparing the others to me.”

So said, well, Pele when he was having a chat with Youtube channel Pilhado, the next somewhat inevitable question put to him: who is the greatest current player, Messi or Ronaldo?

“As things stand today, CR7 is the best player in the world,” he replied. “I think Cristiano is more consistent and Messi isn’t a goal scorer.” That’s the same Messi who is just 17 short of Pele’s record total of 643 goals scored for the one club. Now, that wasn’t forgivable.

Back to his favourite topic. “My father and mother closed the factory... there is only one Pele. Maybe because God loves me.” Not if He’s a Messi fan.

They say ‘never meet your heroes’, but Peter Crouch’s meeting with his was a memorable one, as he told the Daily Mail last week.

Sadly, the Brazilian Ronaldo didn’t recognise Crouch when the Englishman approached him on an Ibiza beach and asked to have his photo taken with him. “I hoped he was going to say: ‘Oh, you’re Crouch!’ but he didn’t have a clue who I was.”

But the image of Ronaldo supplied by Crouch was a splendid one. “He was busy getting through bottles of beer and had an ashtray balanced on his stomach. Every time he finished his drink, the supermodel who was with him brought him another.”

1 Ken Early: Liverpool fans, Bamber Gascoigne and a close shave in Istanbul
2 How Mary Pierce stepped into the light and played for herself
3 Tiger shines and Brady bites back as charity match proves an enjoyable release
4 As news gets better, can the pull of The Field be resisted?
5 Sideline Cut: Vignette shows why Bird is the true shark in The Last Dance
Real news has value SUBSCRIBE
Crossword Get access to over 6,000 interactive crosswords