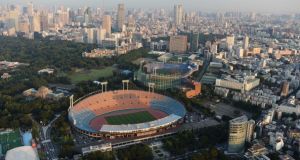 The National Olympic Stadium which will host the opening and closing ceremony of the Tokyo 2020 Olympic Games. Photograph: Getty Images

Australia coach Graham Arnold has called for the age limit at the Tokyo Olympics football tournament to be raised to ensure that players who helped their country qualify remain eligible if the Games are postponed to 2021.

The Olympic men’s tournament is largely a youth affair, with squads allowed only three players above the age of 23.

The International Olympic Commission has said it will not make any decision about the July 24th to August 9th Tokyo Games for four weeks but IOC member Dick Pound has said the global body had already decided to postpone them until 2021 due to the coronavirus pandemic. Postponement however would mean a number of players who have already qualified would become ineligible due to the age limit.

Arnold said he had contacted the IOC’s Coordination Commission chief John Coates, who is also the president of the Australian Olympic Commission, and urged him to help get the age limit raised for players who might otherwise miss out.

“It’s probably the only sport at the Olympics which has an age limit and you’d expect that Fifa and the IOC will consider that, for one Olympic campaign, that age group increases so those players get the opportunity to fulfil their dreams and what they’ve achieved,” Arnold said in comments published by Fairfax media on Tuesday.

“I said (to Coates), ‘you need to make sure the age group for the boys is shifted to 24 so those boys who helped qualify their nations have the chance to still go’. That would be, I think, the fair thing.”

Australia are among the teams that have qualified for the 16-nation tournament. Football Federation Australia chief executive James Johnson said Games authorities needed to discuss the age issue.

“I think this is a decision the Olympics and Fifa are going to have to talk about, and I’m hoping that anyone that did qualify for the Olympics is able to become an Olympian,” he told reporters in Sydney on Tuesday. “I think that’s really important for the players.”

1 Johnny Sexton aware of how Ireland can offer fans an escape
2 Extremes of sweet and sour for Solskjaer as Man United show signs of revival
3 The Offload: Spectre of doping hangs heavy over South African rugby
4 Bennett girding his loins for impossibly unpredictable Vuelta
5 Gerry Thornley: After 32 weeks the Six Nations is back up for grabs
Real news has value SUBSCRIBE
Crossword Get access to over 6,000 interactive crosswords