After 11 of 13 seasons in the wilderness, Friday 13th in Drogheda was a night for celebration 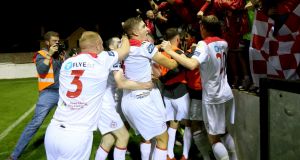 Shelbourne players celebrate with fans during last season’s First Division clash with Drogheda which saw the visitors win the league and return to the top flight. Photo: James Crombie/Inpho

It was after Aidan Friel had put Shels 1-0 up in the 64th minute – and the celebrations had died down among the away fans in the Windmill Road terrace – that the real worry started to creep in.

Not so much a worry, actually, more a feeling of the inevitable heartbreak that was bound to come. With 26 minutes left and playing against a team who had already seen their star man sent off, it all looked so rosy. The equation was simple: Shels had to win to take the First Division title and return to the top flight after six seasons in the wilderness. Lose and it was in Drogheda’s hands with one game to play.

77th minute: Drogheda equalise. Back to square one.

Because this is Shelbourne Football Club and nothing is ever simple.

How many examples do you want to back up that statement?

Pick a number, there are countless to choose from. You want some symmetry served alongside? No problem.

Let’s take a journey back to roughly a year earlier when we were all here, in this exact same spot, watching Shels beat Drogheda 1-0 in the first leg of the promotion playoff semi-finals.

Four days later that sliver of hope turned to horror in one of the most bizarre football matches any of us had ever watched as not one, but two Shels players were sent off within the first 37 minutes while Seán Brennan also gave Drogheda the lead.

Cue one of the most herculean second-half performances ever seen in Tolka Park as Drogheda scored a second to go ahead on aggregate before, somehow, Adam Evans levelled to send the match to extra-time as the nine men in red continuously repelled the visitors. And then, yes, as is so often the case, the inevitable heartbreak came in the form of a penalty shootout defeat.

Go back further and they start to rack up – relegation in 2013 after a brief two-year return to the top flight; losing on penalties, as a First Division side, in the FAI Cup final against Sligo in 2011; just a week before that seeing the First Division title whipped from our grasp in the dying seconds of the final match of the season when Graham Cummins headed home a Cork City winner; coming within seconds of promotion in 2008 – just two seasons after the ignominy of being demoted as Premier Division champions in 2006 – only for Limerick’s Colin Scanlan to score an equaliser at the Ballybough End with, you guessed it, seconds to play.

As a Shels-supporting friend regularly says – the first rule of the Shels supporter’s guidebook is to never, under any circumstances, start to believe.

With all of the sporting highlights that sprung to mind when considering the question “what is your favourite ever sporting moment?” thoughts might have turned to Robbie Keane’s goal against Germany at the 2002 World Cup, Shels hero Wes Hoolahan opening the scoring for Ireland against Sweden on the biggest stage at Euro 2016, Robbie Brady’s winner against Italy a few days later, Pádraig Harrington opening the floodgates for Irish Major wins at Carnoustie in 2007, Shane Lowry last summer at Royal Portrush or being there to see Manchester United pull off one of the most unexpected Champions League comebacks ever in Paris last year.

They’re all big-time, global moments. The League of Ireland is not big-time and certainly not global. It’s small and, to most people, insignificant.

But when you’ve been going to see a team play home and away since you were eight-years-old, when you’ve met some of your best friends in the process, when every Friday night between February and October is left clear for trips to Ballybofey, Cobh and beyond, when you’ve seen your team play in every League of Ireland ground in the country, when you see older fans who soldiered through the dark League of Ireland days of the 1970s and 80s still going week after week, when you’ve gone through all of the disappointment and still hold out some hope, how could this not be your favourite sporting moment?

But it’s none of those because that night in Drogheda felt different. With a new owner, new CEO, new manager and huge strides made on and off the pitch, this felt like a new Shels.

And so, here we are, standing on this terrace which is god knows how old, 700 of us packed in to watch the distinctly rare occasion of a sold-out First Division match. There are pockets of Shels fans all around the ground in the home sections and, while this a chance for Drogheda to derail the Reds and give themselves a real chance of stealing the league title, the potential return of the 13-times champions of Ireland to the top flight is the story tonight.

Not that many people care. In fact, very few people outside of that 3,000 odd in the stadium care at all about what the outcome is. This is small time. But that’s what makes it’s all the better. You recognise almost every face. You feel part of a community. You’re surrounded by people from all walks of life and different parts of Dublin and beyond who you would never have met if it wasn’t for this common thing which brings us all together.

Who cares if no one else cares?

We care and we’re here now and Oscar Brennan has just volleyed Shels into the lead with nine minutes to go and we’re trying to suppress the false hope and now we’re into injury time – the kryptonite of so many Shels teams over the last 13 years since demotion – and surely Drogheda will equalise and spoil the party.

But wait, Lorcan Fitzgerald is running through on goal and he’s poked it past the goalkeeper and it’s rolling into the net and is this really happening? Have Shels really done this? Surely something is going to happen to take this away from us?

But it doesn’t. It has happened. It’s finished 3-1 and all of a sudden Reds fans are flooding the pitch and the weight of dread has been lifted. The resurrection has become very real. The Premier Division awaits. Dublin derbies. Dreams of Europe. It’s all there and it’s all possible but it can wait.

For now it’s back to the bar in Tolka Park where players, coaches, backroom staff and fans celebrate together. There are fans sitting in the stands, in the dugouts and on the pitch, all soaking in that September night – Friday the 13th of all days – when it really felt that Shelbourne, 13-times champions of Ireland, had returned.