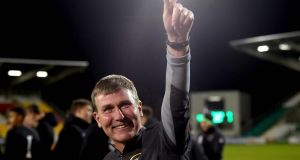 The FAI has put an end to the speculation over who will manage the Republic of Ireland in the Euro 2020 play-offs, whenever they are played, by bringing forward the appointment of Stephen Kenny by almost four months.

The decision, which was confirmed on Saturday afternoon, comes in the wake of the decision by Uefa on Wednesday to postpone the play-off games until after the summer, a move which meant if Mick McCarthy was going to oversee another Ireland match then his term was going to be extended or a very peculiar arrangement arrived at.

Neither would have been likely to appeal to Kenny but it seems in the end that no attempt was made to even raise the possibility with him.

Instead, a decision was taken within the FAI that given the contractual situation there was nothing to be gained by allowing the uncertainty to persist, and a call was made to McCarthy on Friday afternoon. The former Irish captain is understood to have taken the news well and there was no acrimony regarding the move.

Indeed, after it was announced, McCarthy said: “I fully support the decision. It’s only right and fair that Stephen gets his chance on August 1st.”

“I said to Roy [Barrett]that the only thing I’d ask for when leaving is a couple of tickets for next Euros when we qualify.”

The manager’s contract will be paid up in its entirety, with the three months salary due to him, plus the €1.1 million bonus he was due to receive under the terms of his contract. There is also the possibility, it is believed, of a substantial additional payment becoming due should Ireland qualify for the European Championships. McCarthy is now free to pursue other jobs, most obviously back in the English club game.

“On behalf of the FAI, I wish to express our gratitude to Mick for his service and commitment to our national team throughout his career and particularly in his second spell as Ireland manager,” said Interim CEO Gary Owens in an association statement issued after the news had broken. “We wish Mick and his staff well and we thank them all for their hard work in this European Championship campaign to date.”

As the clearly statement suggests, McCarthy’s assistant Terry Connor and goalkeeping coach Alan Kelly both depart with him.

It is expected that Robbie Keane, whose appointment to the coaching staff had been down to John Delaney rather than McCarthy, and whose contract ran longer than the manager’s, will also be departing from the senior set up although that has not yet been confirmed.

Kenny, meanwhile, gets an unexpectedly early start in the new job with five months rather than weeks to prepare for his first game in charge which is still likely to be the opening fixture of the Nations League campaign, away to Bulgaria, on September 3rd. Despite the obvious restrictions that he must operate within at present, he is likely to be busy from the off.

It will come as a relief to the 48 year-old, who managed Longford Town, Bohemians and Derry before enjoying really exceptional success at Dundalk and taking the international Under-21 job in late 2018 on the basis that it would lead on the senior one. He has been something of a bystander as the successive postponements of the Slovakia game prompted speculation that he might be made to wait a while longer for his promotion.

There was always a belief among those close to him that the terms of his contract, which specified an August 1st takeover, would be honoured, however, and that confidence is likely to have been strengthened by the success he has enjoyed in his year with the Under-21s. The team has shown very significant improvement over the past year and, after a good Toulon tournament, currently lead their European Championship qualification group.

One downside of all of this is that he will not get to see that campaign through but he had always made it clear that he wanted to make the step up on schedule.

It will be interesting now to see how much he changes things in the senior set up with his record suggesting he will want to put his own stamp on things from the outset, both in terms of personnel and tactics.

The timing of the Euro 2020 play-offs is completely uncertain and it is far from clear whether they will even be played this year, with the Nations League programme already set out and Fifa currently examining the scheduling of the World Cup qualifiers.

It is not yet known who he will want to work alongside him in the senior job but former international midfielder Keith Andrews, who would have played with a couple of the longer serving current squad members, is his assistant at Under-21 level while Jim Crawford and Dan Connor are the most obvious other members of the management team. Damien Duff, currently working at Celtic, has also been linked with a possible role.

If they do not move, Andrews or Crawford are likely to be seen as strong contenders for the Under-21 job although one possible solution to the Robbie Keane issue might be to offer him that job. It is not clear whether that would appeal to either side, though.

There will be no shortage of interest, in any case. the team currently leads Italy at the top of the Group One qualification by three points with two games more played. Group matches against Iceland and Luxembourg could, on the face of it, be rescheduled into vacant September dates which would give the new manager two games in charge before October’s key visit to Italy.

It is entirely possible, however, that the reminder of the fixture list will, like so much else just now, be subject to dramatic change at a time when nothing, it seems, is immune to the wide-ranging effects of the Covid-19 crisis.