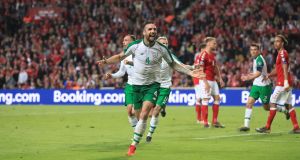 The schedulers really didn’t help us on this one, turning our Friday evening in to the telly equivalent of rush hour on the M50. Not only did the opening game of the World Cup clash with Puppy School on Channel 4, there was our lads’ latest trip to Copenhagen on at the same time too. All you needed to complete the pile-up was to be sad enough to have a soft spot for Love Island.

So, no more than Tyson’s little brother Tommy Fury trying to decide between Lucie, Amber and Molly-Mae, we didn’t know where to fire cupid’s sporting arrow, so to speak.

But Darragh Maloney and his panel – Didi Hamann, Liam Brady and Richie Sadlier – only had eyes for the Danish game, although mercifully they didn’t watch it from a hot tub while wearing Speedos. They must, though, have been a little envious of Gabby Logan and the BBC crew, RTÉ’s backdrop at the start of the evening just a pink and blue wall in the Montrose studio, while Gabby said hello to us with the Louvre over her shoulder.

While there might be some distance to travel yet on that parity road, what we learnt on Friday is that the women’s World Cup is capable of producing an opening ceremony just as odd as anything the boys have ever offered us, the only regret that George Hamilton wasn’t free to commentate on it. What he would have made of the dancing lads who were able to reposition their arms over their shoulders in such a way that it seemed like they’d been removed from their sockets, we will never know – we’ll just have to die wondering.

But if it wasn’t for TG4 we wouldn’t have seen a whole lot of the spectacle, the BBC only showing us a snatch, opting instead to stick with Gabby chatting with her team of pundits, Alex Scott, Hope Solo and Dion Dublin. Dion, incidentally, told us that he had done mountains of research for the tournament so was able to tell us that the French team was really tall and that South Korea would give it their best.

Over to TG4, then, where a French singer by the name of Jain was entertaining us. Because Jain was born in Toulouse and grew up in Dubai, Congo-Brazzaville, Abu Dhabi and Paris, learning drums in Pau, Arabic percussion in the Middle East and musical programming in Congo, Fifa chose her as the star of the opening ceremony because her upbringing “embodies the global element of the Women’s World Cup”. Some of us, though, just wondered had her parents been on the run.

Towards the end of the ceremony the French air force – or the “Rouge Arrows,” as Gabby called them – flew overhead leaving an impressive trail of blue, white and red smoke, and Jain and the fellas with the out-of-joint shoulders departed the pitch. Out the teams came, the stadium jammed, the sound of high-pitched roaring from – evidently – the very many young girls in the stands a very, very lovely thing.

Off we went, Jonathan Pearce quoting Thomas Jefferson and citing England’s boys’ 1966 triumph, for no apparent reason, rendering Sue Smith speechless. She found her voice once France began dissecting South Korea, Wendie Renard, whose middle name appears to be ‘Towering’, heading home twice. Whether Jonathan was otherwise engaged when the goals went in, possibly playing Solitaire on his phone, or whether the BBC has a time delay issue, we’re not sure. Also, they need to turn up the volume on Jonathan’s mic – although the poor fella has so many detractors, there are some who’d like his mic switched off.

Back to Copenhagen, Denmark scoring with 15 minutes to go.

Before the game Tony O’Donoghue had asked Kasper Schmeichel how he planned on dealing with the threat of Shane Duffy from set-pieces, Kasper sounding reasonably hopeful that the threat could be snuffed out.

So much for that. As Jim Beglin put it, “his head gives you hope”.