All in the game: Lennon laughs off ‘Hampden Hoodoo’ as cup disappears 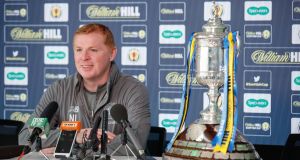 Celtic manager Neil Lennon prior to him asking for the Scottish Cup trophy to be removed during a press conference at Lennoxtown ahead of the semi-final against Aberdeen at Hampden Park. Photograph: Steve Welsh/William Hill/PA Wire

Neil Lennon on being asked before his team’s cup semi-final against Aberdeen on Sunday about his ‘Hampden Hoodoo’, him having lost cup games there as Celtic gaffer against Ross County, Kilmarnock, St Mirren and Hearts:

“A lot’s been made of that this week but I can’t get those games back. Call it Lady Luck or a curse or whatever, but I’m not into that superstitious stuff.”

Later that day, from the Daily Record:

“Neil Lennon refused to sit next to the Scottish Cup as he prepared his team for the Hampden clash. Before he spoke to the Press, the superstitious boss asked sponsors William Hill to take the famous old trophy out of the room.”

River Plate of tears as tattoo’s code is broken

It was certainly in the running for our prestigious ‘Tattoo of the Year’ award, but then it all went horribly wrong. Initially, a story emerged about a diehard supporter of River Plate having something called a QR (quick response) code tattooed on his leg which, when scanned by his phone, prompted the playing of a YouTube video showing the highlights of River’s victory over their less-than-loved neighbours Boca Juniors in the Copa Libertadores final at Real Madrid’s Bernabeu last December. Genius.

Now when you scan the tattoo, all that shows up is a message saying ‘this video is unavailable’. According to Who Ate All The Pies, a Boca fan organised mass reporting of the video to YouTube for copyright infringement, resulting in its removal. “Gloriously vindictive pettiness,” as they described it. All that pain for a dead link.

Angriest Fan of the Week

That would be a chap by the name of Jonathan Kotler, a 73-year-old professor who teaches media law at the University of Southern California. Many decades ago, Kotler was visiting London and was taken along to a Fulham game, and he’s been a fan of the club ever since. So dedicated is he, he travels eight to 10 times a season to watch them play, all of which involves 22 hours of flying. Hopefully all that jet lag helped numb the pain of watching them get relegated two days into April this season.

Any way, the BBC have reported that Kotler is suing the California Department of Motor Vehicles for violating his constitutional right to freedom of speech after they refused him permission for a personalised car number plate, deciding that the letters he had chosen to express his love of Fulham “could be considered hostile, insulting, or racially degrading”. “The people at the DMV are either extra thick or very PC,” a highly peeved Kotler complained.

What did he want on his reg plate? ‘COYW.’

That would be the one that Romanian club FC Politehnica posted on their sundry social media accounts, as spotted by ESPN. It featured their newest recruit, American goalkeeper Jacob Samnik, alongside chairman Adrian Ambrosie after Samnik had signed a two-year contract with the club. If you clicked through on the photo you would have gotten to see all of the fella, but the preview photo was unable to accommodate the top half of his head. There’s a chance that Politehnica’s social media photo-posting person had never before had to deal with a player who, at six feet eight, is a whole inch taller than Peter Crouch.

That’s roughly how many hours of your life you’ll never get back after tuning in to Oireachtas TV last Wednesday.

“I think United had a player who was responsible for Barcelona not being Barcelona and Messi not being Messi – Scott McTominay. He was like a rabid dog.” – Jose Mourinho, lest you’re concerned, was being complimentary about the young Scott.

“I don’t believe City made a plan to kill him – for me, it was an accident.” – Mauricio Pochettino accepting that there was no murderous intent on Manchester City’s part after Harry Kane hobbled out of that Champions League tussle.

“The blow was strong, as if a train runs over you.” – Barcelona coach Ernesto Valverde on that moment Lionel Messi was left bloodied after a collision with the Manchester Express, aka Chris Smalling.

“I am waiting for answers. When you have negotiations you have to talk, then they give you this or that. It’s just like the Brexit talks.” – Rafael Benítez, still not sure if it’ll be a case of remain or leave as his contract talks with Newcastle drag on, although he could do with them being resolved by Halloween.

“He’s the James Milner of Man United.” – Paul Ince on Ashley Young. Ince, you suspect, will be hearing from Milner’s lawyers.

“Before I read and watched everything, but not any more. It’s like a chocolate cake, if you eat too much, then you get an upset stomach.” – Kylian Mbappe’s Da Wilfried revealing that the endless speculation about his young lad’s future gives him tummy-ache.

“Take our chances, not concede a goal, and play with more heart and bo****ks.” – Romelu Lukaku on what Manchester United need to do in the Nou Camp next Tuesday. Easy peasy.

1 Saudi Arabia-funded takeover of Newcastle United in serious doubt
2 Gerry Thornley: Home and away Six Nations could be its ruination
3 Net-tricks: How John McEnroe became the inner voice of a 15-year-old girl
4 Decision expected next week on staging of College Football game in August
5 RTÉ to start summer racing coverage with 1,000 and 2,000 Guineas
Real news has value SUBSCRIBE
Crossword Get access to over 6,000 interactive crosswords