Conway and The Quiet Man prove adept at frustration game 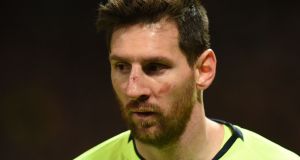 No disrespect to him at all, because he had quite a few issues to address, but there was a spell during FAI President Donal Conway’s morning statement to the Oireachtas Committee for Transport, Tourism and Sport that had you wondering if he’d still be going come kick-off time at Old Trafford.

The statement did eventually end, but you couldn’t but think of Conway and The Quiet Man sitting beside him when, later in the day, BT Sport’s Owen Hargreaves fretted over the Manchester United midfield selected for the tussle with Barcelona.

His concern was that they’d be incapable of thwarting, foiling and stymieing the opposition and putting in an all -round solid defensive display.

Hargreaves, then, might have been considerably more confident if Ole Gunnar Solskjaer had been able to pick Conway and The Quiet Man for the United midfield, instead of Fred and Scott McTominay, the fella also having grave doubts about the United rearguard’s ability to frustrate Messi, Suarez and Coutinho as successfully as the Oireachtas front three of Coppinger, Rock and Troy had been by the FAI back two earlier in the day.

Before turning his attention to the less important Champions League game of the night, Ajax against someone, Virgin Media’s Tommy Martin felt obliged to ask Niall Quinn and Brian Kerr, the pair of them goggled-eyed from watching Oireachtas TV all day, what they had made of the proceedings.

Neither, it would be fair enough to say, was impressed.

“At times it was it was like watching the Sopranos in action, the untouchables,” said Niall, “I did not enjoy it.”

John Delaney, he said, had “parked the bus”. “I thought he had more in him than that. I’ll go so far as to say, at 92 caps for my country, today for the first time in my life, I was truly embarrassed of my association. As low a point as I can remember.”

Brian was kinder. Kiddin’. “The FAI had the opportunity today to be open, transparent, humble and truthful. What we actually got was evasion, arrogance, dodging and weaving, and I’d say large doses of spoofology in the replies to the questions that were asked. Those people today, in my book, were an embarrassment to football. They showed the reason why there should be change.”

Niall, a man who would look at an empty glass and insist it’s three quarters full, was hopeful the day would be a “catalyst for change”, but Brian had the look of a fella who would rather pick Fred and McTominay for his midfield than ever have to watch a day of Oireachtas TV again.

Time, mercifully, for actual football. Naturally enough, much of the pre-match chat centred around that promising young Argentinian lad Lionel Messi, Graeme Souness reckoning that if he hadn’t made it to Old Trafford he’d rate it a 50-50 game. But having seen him get off the bus, “that makes it 85/15”.

“I liken him to a big cat walking around the jungle and when he sees something he likes, he sprints,” he said, having noted that Messi is more economical with his running these days now that he’s a rusty auld 31. The important thing, he believed, was that “like the lion in the jungle, don’t pull his tail, don’t make him angry”.

So, when Chris Smalling left Lionel with a bloodied nose and eye after an indelicate challenge for the ball, when United were already a goal down, you could only worry that he and his colleagues would be gobbled up like hapless gazelles bumping in to the king of the jungle during a stroll.

The goal, incidentally, was proof that VAR can be a curse, the referee having incorrectly disallowed it before the lads with the tellies told him it was perfectly grand. Pre-VAR United would have had a decent 0-0 going in to the second leg, enough to bring out your inner Luddite.

All to play for, though, in that second leg, only an away goal in it. United will have a comfort break before then too, with only Premier League top four-chasing matters to attend to, so they’ll be fresh. And as BT’s Steve McManaman declared, as United headed for a home defeat in the first leg, “there’s nothing to fear from this Barcelona side”. Steve, bless him, sees an empty glass and thinks it’s overflowing.