TV View: Klopp’s Liverpool succeed in the most beautiful way 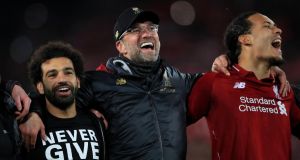 As a man from Govan once put it, “football – bloody hell”.

And even if you were raised to regard Liverpool as the Devil’s Spawn, you could only remove the cap from yer head and doff it.

“If we can do it, wonderful. If not, then fail in the most beautiful way,” Jürgen Klopp had said pre-match, and all you could offer was a tilty headed ‘ah bless’, the notion that Liverpool, minus Mo Salah and Roberto Firmino, could overcome a 3-0 deficit against a Barcelona side containing Lionel Messi as likely as, dunno, a Vincent Kompany wonderbolt making Manchester City champions-elect.

And that City of Manchester Stadium net was probably still rippling after Komany’s projectile, leaving Gary Lineker wondering if Klopp’s lads would be psychologically damaged by the goal. “It was like a dagger in the heart, innit,” Rio Ferdinand agreed, although after just the six and a bit minutes it looked like Liverpool were up for filleting their visitors, showing no psychological damage at all.

But the absence of Salah and Firmino from Klopp’s starting XI hardly put hope in the hearts of the faithful. Nor Damien Duff, for that matter, the fella less than inspired by their replacements. “No disrespect to Origi and Shaqiri, but . . . ,” he said, feeling no need at all to complete the sentence. After those six and a bit minutes, though, it’s likely he was penning a heartfelt apology to the Origi lad.

And anyone who doubted Georginio Wijnaldum could make a contribution when he lifted his bottom from the bench . . . morto.

And come the 78th minute, one half of Liverpool was showering Origi with marriage proposals, or, at the very least, vowing to christen their next baby Divock.

2-0, George Hamilton: “Wijnaldum has put Liverpool in touching distance of their miracle!”

“This place is shaking,” hollered Jim Beglin, “and I suspect Barcelona are too!”

He wasn’t wrong. They were dissolving before our very eyes.

Jim: [No longer able to speak]

And by then Liverpool were even without Andy Robertson, his, um, first-half brush with Luis Suarez’s foot leaving him banjaxed, prompting Liam Brady to note at half-time that “we’ve seen Suarez bite like a horse – now we’ve seen him kick like a horse”.

And a chunk of the pre-match chat, on both RTÉ and BT, centred around what kind of reception Luis might get from the contents of Anfield in the aftermath of his somewhat, well, truculently belligerent display in the first leg, Damien, Liam and Didi Hamann having a right old giggle when Darragh Maloney told them that John Aldridge had labelled the fella a sneaky, nasty rat for his antics in said game.

Back on BT, Suarez was being interviewed and you’d swear butter wouldn’t melt, the fella coming over as huggable as a Carebear. “When I played for Liverpool I fight with everyone, it’s no problem,” he said, but Robbie Fowler had a severe problem with him, noting that he “showed no respect towards Liverpool and the fans last week”, his crime scoring and being as irritable an on-field presence as he had been in his Anfield days when Fowler worshipped him. Chuckle, indeed.

But Suarez was certain he would get only respect from the Anfield crowd after all he had done for the club.

Some time later: “CHEAT! CHEAT! CHEAT!,” they bellowed when he went down like a sack of spuds having barely been brushed. Short memories, like.

No matter. There was the unavailable Salah arriving in the ground wearing a t-shirt that read ‘Never Give Up’, and his workmates took it to heart, their phoenix from the ashes efforts over the 90-plus minutes enough to make you conclude that anyone who doesn’t love football is missing the very loveliest part of life, way above the birth of children, Lottery-winning and the like.

You can feel it in your bones, now. A last minute Shane Duffy headed winner against City on Sunday, and they’ll be replacing the Bill Shankly statue with one of Chris Hughton. Double done and dusted.

What’s it they sing?

At the end of a storm, there’s a golden sky, and the sweet silver song of a lark . . . Hidqofduqfdufwyd. Now we know, nothing’s impossible.