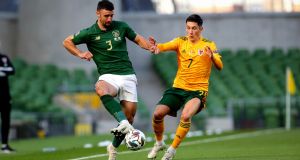 Ireland’s Enda Stevens in action against Harry Wilson of Wales during the Nations League game at the Aviva Stadium. Photograph: Ryan Byrne/Inpho

Just over a week into a chaotic window, the Irish players could be forgiven for feeling as though they have been thrown into come crazy coronavirus game show.

With both positive and negative tests getting overturned, team-mates are expelled from the squad, then just as suddenly reappear, others get reprieves then have them withdrawn. None of it a great advertisement for a system we need to be able to believe in but while many inevitably fret, footballers, says Enda Stevens, “are just programmed to get on with it”.

For just a moment, the always amiable Dubliner sounds as ruthless as any Apprentice contestant when asked on Tuesday whether his own faith has been shaken by the event of the past few days.

“I don’t want to get involved in that, to be honest,” he says, almost cutting the question short. “I’m no scientist, I’m no doctor. I just want to play football so as long as my test comes back negative, I’m happy enough.”

The feeling, he suggests, is common through a squad that is without six players due to Covid-19, with two having tested positive and four regarded as close contacts. That’s not counting Adam Idah and Aaron Connolly who have returned from temporary exile.

“It’s new to all of us but it’s something that we just have to get on with and just focus on the football.

“It upsets our rhythm when the manager has his team picked and you hear so late but as footballers we are just programmed to get on with it. We can’t really be making excuses or anything like that. We’ve got a job to do and hopefully we can do that tomorrow.”

The tone lightens when he gets going about the actual football. Stevens, at 30 years of age, has enjoyed by far the best spell of his career playing as a wing back at Sheffield United and has clearly been happy to hear Stephen Kenny’s “attack is the best form of defence” message.

“As a team and as a unit I think we’ve improved massively defensively,” he says, “because it’s not just a case that we’re sitting on the edge of our own box with 11 men behind the ball; we’re putting pressure on teams higher up the pitch and winning the ball back in better areas, and I think that’s resulting in us creating more clearcut chances in front of goal.”

The goals that are supposed to follow have so far proven to be elusive but Stevens seems certain they will come.

“We would have expected goals,” he says. “We’ve been working hard in training and the lads are confident. We have dominated long spells in the games but we need to score when we are on top because then you can relax and really settle into the game. We haven’t been a million miles from that.

“I think that if you keep creating chances then we are going to score sooner rather than later. As long as we stay in games, though, then the goals will come.”

1 Waterford turn Kilkenny upside down and inside out
2 Ireland’s work-ons: Four things Andy Farrell needs to address
3 Jim McGuinness: There is a way to save championship and make it competitive
4 Sordid murder of hurling brothers still resonates in south Galway
5 Conor Gallagher gets West Brom off the mark as Blades blunted yet again
Real news has value SUBSCRIBE
Crossword Get access to over 6,000 interactive crosswords