Saturday’s Merseyside derby is the most fascinating in years

This time, with Liverpool champions and Everton top of the league, it is different 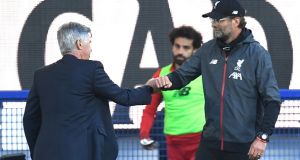 For most of the last 30 years Liverpool have gone into Merseyside derbies as favourites, so it is ironic that now they are finally crossing Stanley Park as Premier League champions they are having to deal with Everton getting most of the pre-match attention.

We know enough about Carlo Ancelotti’s side’s perfect start, not just four league wins out of four but seven victories out of seven in all competitions. We know about Dominic Calvert-Lewin’s goals, James Rodríguez’s unlikely rehabilitation and Jordan Pickford’s erratic displays. But what can be expected of Liverpool based on their season so far?

This time last year, back when things were normal and eight matches had been played, the prospective champions had recorded eight consecutive league wins and were just about to drop their first points of the season in being held to a draw at Old Trafford. It would be the end of February before Liverpool dropped any more, falling to unexpected defeat at Watford with the title all but confirmed after an incredible 26 wins plus the point from Manchester United.

So unanswerable was that sort of form and consistency that most people assumed it would be more of the same this season, with only Manchester City likely to be able to stay with the pace, but so far it has not quite turned out that way. The first defeat of the season arrived early, for a start, and anyone surprised at the 3-0 scoreline at Watford last season would have been flabbergasted by the 7-2 outcome at Villa Park.

There were some extenuating circumstances, Liverpool were missing Alisson through injury and Sadio Mané through testing positive for Covid-19, but not enough to wholly explain such a mauling for newly crowned champions playing a side that only narrowly avoided relegation a few months earlier. While Liverpool’s relentless consistency was their chief asset last season, their unique selling point when even sides as strong as Manchester City and Tottenham were wavering, the illusion of impregnability evaporated at Aston Villa.

Perhaps there were signs that all was not functioning completely correctly on the opening day of the season, when Liverpool shipped three goals in a 4-3 victory over newly promoted Leeds. Yet when that was followed by a clean sheet at Chelsea and a tidy home win against Arsenal a fairly testing start to the campaign seemed to have been successfully negotiated. The way things looked before a ball had been kicked Villa would be one of the less troublesome of the early fixtures, a respite between the two London clubs and the derby.

Now the derby itself has taken on greater significance, with Everton top of the league and confidence high in the blue camp, the idea that Jürgen Klopp’s Liverpool are a win machine switched to a permanently high setting no longer seems quite as persuasive.

Not that Liverpool are alone in falling to heavy defeats this season. Both Manchester clubs have also conceded five goals or more, amid a general feeling that this odd, spectator-free football has still to settle down into a pattern, never mind a predictable pattern. Adding to the uncertainty around Anfield have been no fewer than four coronavirus positives, two of them to key first-team performers in Mané and Naby Keïta, and one to limit the contribution thus far by new signing Thiago Alcântara.

Liverpool have been unlucky also in losing their first choice goalkeeper – although the initial prognosis was just a few weeks, shoulder injuries are never good news for goalkeepers – while off the field the club’s owners have been revealed as central plotters in the dismal Project Big Picture scheme, something that will almost certainly sit uncomfortably with Klopp’s egalitarian instincts.

In short, though it is only 12 weeks since Liverpool picked up their well-deserved prize at an empty Anfield, the landscape has already altered around the champions in ways that few would have anticipated. Suddenly there are questions to be asked and answered, with most Everton fans keen to commence the interrogation. Once again a Merseyside derby is being hyped as a potentially cataclysmic event when everyone knows they are usually nil-nil draws, or dull games enlivened by mere moments.

The last Goodison derby was supposed to see Liverpool win their long-awaited first Premier League title on their rivals’ patch. Supporters had been counting down the days and working out the permutations for weeks – nervously or excitedly, depending on allegiance – though of course it didn’t work out like that. A goalless draw simply cost Liverpool the chance to reach 100 points for the season and the opportunity to clinch the title in the next game at Anfield. Instead there was an off-stage coronation when Manchester City stumbled at Chelsea.

Derby matches are often like that, prosaic rather than pivotal. While the Merseyside version has managed to be more colourful than most in its long and proud history, the reality for the last few decades is that it has been essentially a private scrap, a localised issue of limited relevance to the rest of the game. This time, with Liverpool champions and Everton top of the league, it is different.

History suggests the derby will not be as open or as freakishly compelling as events at Villa Park last month – a game apparently responsible for convincing Premier League officials they should be charging for such rich entertainment rather than airing it for free – though outside interest will still be high. It is not often you see Liverpool beaten 7-2, defending champions or not, and anyone who missed it will be just as keen as those who watched it to see how they are going to react. - Guardian