Finding Jack Charlton: A sensitive chronicle of his ‘greatest challenge’ 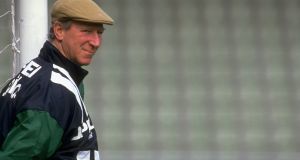 You may think there is nothing more that needs to be said about Jack Charlton given all the tributes, stories and retrospectives that followed his death in July but there is plenty more to say and, thanks to Finding Jack Charlton, a powerful documentary, there will soon be more to see.

“The trailer [to be released on Tuesday] says: ‘He conquered the world, he transformed a nation, then he faced his greatest challenge,’” says Gabriel Clarke, one of the film’s directors. “Jack and the family showed great courage in enabling us to document it and celebrate his life. Because ultimately that is what they wanted to do: celebrate a life like no other.”

The greatest challenge refers to the dementia that beset Charlton in his final years. The family allowed the filmmakers into their home during that period and the resultant footage, when interspersed with scenes (some never before shown) from his glory years, is both sad and strangely uplifting. On one hand it is painful to see Big Jack in a diminished state, struggling to walk and communicate, unable to remember much about his life. On seeing his 1966 World Cup winner’s medal he exclaims: “Good gracious me!”

Depicting the cruelty of the illness, albeit tactfully, fits the blunt honesty for which Charlton was famous. What gives the film its power and joy is the message that life is short, hurt is inevitable but try boldly to make the most of it and there is no limit to the wonders to be wrought, the friends to be made.

Finding Jack Charlton is not a football film, although the sport features prominently. It is a true and sensitive chronicle of a man who was a great player and manager, a significant historical figure, a bon viveur and a character who could be formidably intransigent in his thinking, sometimes even vindictive, but also endlessly curious, fair and compassionate. A man deeply attached to his roots in the north of England who formed a connection with Ireland that seemed easier than his relationship with his brother.

“Their relationship was a complex one and it was unresolved,” Clarke says of Jack and Bobby. “They had their difficulties. One of the things we were able to discover is that they remained estranged at the end. That is sad. It is not uncommon in families. But people like a happy ending …”

Jack conquered the world. Transformed a nation. Then faced his greatest challenge.

Watch the Official Trailer for #FindingJackCharlton.
Out in cinemas, on DVD, Blu-ray & Digital this November. Pre-order now: https://t.co/fCxLjRBkhj pic.twitter.com/9astNemr4E

One of the gems the filmmakers found is an interview Jack and Bobby did in Italy during the 1990 World Cup. “It was really good to get that footage and also to show it to John [Jack’s son], to be able to show there were times when they were close and Bobby was proud of Jack’s achievements.”

Other seldom or never before seen treats from the archives include excerpts from after-dinner speeches given by Charlton, a gifted raconteur, plus a delightful clip from an old documentary he presented about Dunstanburgh castle in Northumberland. “Throughout his time in full health Jack was always wonderful with the camera,” Clarke says. “I found some fascinating material in the archives and what we noticed when we were filming with the family is that he would still relate to the camera. We had that sense of him being connected.”

Thanks to the use of the archives, the subject in effect narrates Finding Jack Charlton himself. Throughout it there is an endearing feel of even him being fascinated by the extraordinary turns his life takes, in particular his experiences with Ireland.

Although the film became much broader in scope, that was the angle on which its makers originally intended to concentrate. “The initial idea was to frame it around Jack and the transformation of Ireland – cultural, social, political – while the team enjoyed its success,” Clarke says. “I’d read various things about how one directly influenced the other and other suggestions that it was more about a sense of self-confidence and what the football team gave the national spirit.”

The film includes thoughts on that matter from people such as Roddy Doyle, Bertie Ahern and Larry Mullen, as well as players including Niall Quinn and Paul McGrath, who admits he was initially opposed to an Englishman taking charge of his national team.

Appointed at a time when armed conflict was raging in Northern Ireland, Charlton ultimately helped to pave the way towards healing. Mullen goes so far as to suggest the man from Ashington gave average Irish people the confidence to reclaim the tricolour. “It had been taken by the violent republican movement,” the U2 drummer says. “That changed in 1990. We took the flag back and flew it with pride. Jack Charlton did that. Did Jack have any idea? Could it have been anyone else? I don’t think so.”

If the success that Charlton brought also helped to liberate some Irish people from fatalism and self-doubt, the way he did it shifted perceptions of English people. Charlton did a lot to humanise the English to the Irish. He was clever, spirited, funny and interested in people; he thought clearly but accepted, even relished, idiosyncrasies; he got angry and held grudges. Even his flaws were appreciated at a time when many of the English people to whom the Irish were most exposed seemed to think they were perfect.

“A lot of viewers will find the footage we got from the team hotel in 1990 to be fantastic,” Clarke says. “To see Jack singing shows this was not just apocryphal stuff. This is proof of that connection he had and of how much he was the leader of that. It was a natural thing and it worked so well at the time.” - Guardian