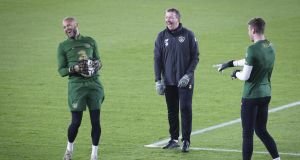 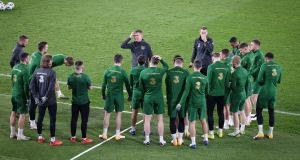 Ireland manager Stephen Kenny speaks to the team during a training session at the the Olympic Stadium in Helsinki ahead of Wednesday’s Nations League game against Finland. Photograph: Matti Matikainen/Inpho

In the months immediately after his appointment had been brought forward, Stephen Kenny spoke with some excitement about the possibilities of this three game international window. With the prospect of earning a place at the European Championships gone, though, and everything overshadowed by the comings and goings related to coronavirus, the new manager will surely be happy to forget all about it if things do not go well in Finland.

Barring a really remarkable turnaround, Ireland’s Nations League group will be decided between one of the current top two sides – Wales and Finland – with Ireland well off the pace and looking like they are playing at this stage for the ranking points that might yet salvage a second seeding for the side in December’s World Cup draw.

Kenny, though, will be anxious to build on the improvement shown against Slovakia and Wales over the past week. Neither match was won but both involved comfortably better performances by his side than the one against Finland in Dublin a month ago, with the team adapting relatively well to the new approach, though looking no better equipped to turn scoring chances into actual goals.

Amid all the chaos caused by the Covid-19 tests and contact tracing over the past week, the absence of Aaron Connolly from the playoff game is generally reckoned to have been the greatest blow to Kenny’s plans. The 20-year-old is back along with Adam Idah and if things continue to function more effectively in other areas of the pitch then this game might present the pair with a greater opportunity to do themselves justice.

Had the Brighton striker capped decent displays with a goal or two in the September games then the levels of expectation around him might have been back up to the sorts of levels experienced around this time last year. That would not necessarily be a good thing for a player who still looks like he has some acclimatising to do after the heights he has reached in such a short space of time.

While Connolly returns, others have gone and Kenny was entitled to mention just how long the list of Irish absentees here is, which he did. Though favourites of his like James McCarthy, John Egan and David McGoldrick all miss out, there was a strong sense that he is happy enough with a lot of the options at his disposal.

Jayson Molumby is one the new manager clearly considers as having the ability to make an impact at this level and after a strong performance against Wales the young midfielder is expected to be fit enough to start again. Kevin Long is said to be in contention too and so it should quite a strong starting line-up with more familiar faces too.

Having started on the left of a midfield three against the Finns in Dublin, Robbie Brady seemed to embrace the return to a more advanced role on the right at the weekend while Jeff Hendrick did enough to retain the number 10 role. Both, though, will know they need to do better around the area.

There will have to be a wider improvement too in terms of the way in which the visitors cope with a side that repeatedly stretched and exposed them in the last encounter. Markku Kanerva very effectively had his players exploit the space between Enda Stevens and Connolly on the left while the Irish centre backs struggled to cope with the passes made from in front of them for the runs of Teemu Pukki in behind.

Falling foul of the same this time would be unforgivable but the Finns may be significantly changed with last week’s 5-1 friendly defeat by Poland having contributed to a defensive shake-up for what was a solid win over Bulgaria in which the manager also changed the system. It will be interesting to see whether then Kanerva, who has a full squad to choose from, reverts to the line-up and formula that served him well last month, although his Irish counterpart maintains that this will be a different encounter regardless.

“The last game against Finland was in the middle of the off-season,” said Kenny, stretching things ever so slightly before acknowledging that: “We can’t just say that for us; for Finland also but it was a strange time.

“Finland, are a very, very good team, though,” he continued. “They proved that by getting to the European Championships, they are nearly like a club team in that they are very certain in their roles. They can play in different ways and tactical systems. Finland have maximised their resources.”

We may have to wait a while for a better opportunity to see just how well Kenny can maximise his resources for they are stretched going into this evening’s game and yet there is the sense that there is enough talent about this team to win this game if they really click.

Against the backdrop of all that has gone on, it would be a remarkable enough victory and although it would not be anything like enough to eclipse the disappointment he and his team suffered in Bratislava, a couple of goals here would give the new manager one positive memory to take away from this window and a bit of much needed momentum to bring into the next.

1 America at Large: Golfers guilty of legitimising Trump’s toxic regime
2 Ireland, France or England? Who needs what to win the 2020 Six Nations
3 Solskjær’s stock is on the rise again after clever squad rotation
4 ‘This is not a personality contest’ - Jack Nicklaus endorses Donald Trump
5 Gael Fickou shifted to the wing as France name their XV
Real news has value SUBSCRIBE
Crossword Get access to over 6,000 interactive crosswords