No time for Kenny or Ireland to lick their wounds 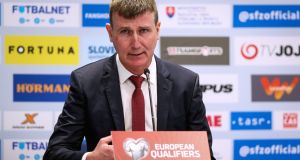 Stephen Kenny: “The determination to try to get to the final, that was very evident, it’s a cruel way to lose on penalty kicks.” Photograph: Tommy Dickson/Inpho

With the disappointment of it all etched in his own face, Stephen Kenny argued immediately after the game that his players deserved better out of Thursday’s night’s play-off in Slovakia but with Wales to come on Sunday there is no time now for the anyone in the Irish camp to lick their wounds.

Having taken just a point from the two games last month, Ireland already lie five points adrift of their weekend’s opponents in their Nations League group, leaving them long shots to top the group and so stay in the running for a backdoor entry to the play-off stage of World Cup qualification.

The more immediate concern will be the team’s seeding for the draw in December with Ireland’s seeding currently hanging in the balance with four Nations League group games to play between now and the publication of the Fifa ranking list that will decide which countries end up in the respective pots.

Thanks to a quirk of the system, Kenny’s side actually provisionally crept back into Pot 2 as a result of the penalty shoot-out in Bratislava but there is still scope for movement with the calculations of rankings website, We Global Football, suggesting that there is next to nothing between the Republic of Ireland, Slovakia and Northern Ireland in what currently looks to be a race for the final place among the second seeds.

The outcome and consequences aside, Kenny was clearly encouraged by the performance against the Slovaks.

“I couldn’t ask any more from the players,” he said afterwards. “They really showed great qualities as men, as Irishmen and they showed themselves to be a real team, there was a tremendous team ethic, everyone did as much as they could.

“The determination to try to get to the final, that was very evident, it’s a cruel way to lose on penalty kicks, we defended well all night, that one block from Shane Duffy off the line but some of our forward play was outstanding at times.”

The number and nature of the chances created is something of a double-edged sword for the manager, however. Clearly, Ireland used the ball more effectively than they had against Bulgaria and Wales last month and should have scored one or more goals. Their failure to convert any of their chances, however, only serves to emphasise the team’s lack of a proven finisher at this level.

Two prime candidates for that status in the future, Aaron Connolly and Adam Idah, are out of the next two games with Sean Maguire and Daryl Horgan drafted in to replace them on Friday. There were no reports of other significant problems following on from Thursday night’s game and so the bulk of the same team is expected to feature at the Aviva Stadium again on Sunday.

Alan Browne, Robbie Brady and Callum O’Dowda are all likely to be in the reckoning to start having come on in Bratislava. The team’s fourth substitute, Shane Long, could potentially feature too if the game is reckoned to have come too quickly for David McGoldrick after his exertions away in Slovakia.

Wales, who were beaten 3-0 on Thursday by England, are set to be strengthened by the arrival into the squad of Aaron Ramsey while Ryan Giggs rested both David Brooks and Harry Wilson for the Wembley game and they are expected to start.

Manchester United’s Daniel James could also feature after having been an unused substitute in the England game which he went into carrying a minor injury. Kieffer Moore (foot) and Chris Mepham (knee) are rated as doubtful for the visitors who beat both Finland and Bulgaria in their opening group games.