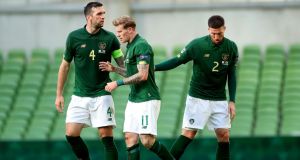 Could Matt Doherty have a future in the centre of the Irish defence? Photograph: Inpho

Besides fumbling a corner, when the Welsh understandably cried penalty, he displayed his usual authority in the wake of being done by that damn panenka in Slovakia.

A Maldini-esque conversion to centre half on 25 minutes allows Stephen Kenny to consider playing his two Premier League right backs in the same line up. Looked comfortable in the new role.

Rough on the Cork veteran that a swollen left eye denied him a real opportunity but it did create the chance to play Doherty out of position.

For Ireland to succeed under Kenny the Celtic defender needs to develop a slick passing game from the back into midfield. There was encouraging evidence of this alongside his usual aerial authority.

Played his part with the perfect ball for Shane Long to score - the striker missed the target - in an otherwise clever performance, all the while minding Doherty at centre back.

Looks comfortable at his level, with tidy touches and a genuine threat dashing up the pitch that should earn him further exposure against Finland.

Shades of Claudio Caniggia in both hairstyle and play. Vital that he keeps growing both aspects, hair and influence on the game, because he really should have dominated proceedings against a disinterested Aaron Ramsey.

Another left foot option and while his physical presence in the middle three allows teammates to shine this selection feels like a reflection on where the unused Jack Byrne stands in the pecking order.

If Brady stays fit he can become a vital figure in a successful era for Irish football. Should’ve hit the target with 33rd minute shot but his quality of free kicks remains a necessary weapon.

A mixed performance, slightly below usual energy levels, before studs on a Welsh achilles earned him a yellow card and a silly lunge ended his time in the starting XI for the foreseeable future.

Ran the channels with aggression, showing some decent touches in a typically unselfish performance but failed to find the target when gifted a free header by Stevens’ slick cross.

Cyrus Christie arrived to hit a lovely shot that skimmed over the crossbar while Daryl Horgan should have scored (twice) from a McClean cross.

Stephen Kenny deserves enormous credit for introducing a cohesive, build from the back approach, and calmly coped with a devastating Covid outbreak that has nothing to do with his brief.