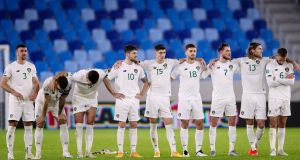 In a week when Ireland’s Euro 2020 hopes were dashed in Bratislava, Stephen Kenny has had more than just football to deal with as Covid-19 caused havoc and confusion in the Irish camp.

On Sunday morning, just hours before Ireland’s Nations League clash with Wales, it was confirmed by the FAI that a first member of the playing squad had tested positive for the virus and that four other players were ruled out as they were deemed to be close contacts.

Here, we recap what has been a difficult week.

The FAI release a statement to say that a non-playing staff member has tested positive for the virus and is self-isolating. Two other staff members had been identified as close contacts, meaning three FAI staff were self-isolating.

The staff member who tested positive is replaced on the trip to Bratislava by a colleague who tested negative for the virus and was not deemed to have been a close contact. On Tuesday afternoon the 45-strong Irish travelling party flies to Bratislava.

Ireland train at the Tehelné pole stadium in Bratislava with all squad members available. Later that day a positive Covid-19 result – from a test carried out on the ground in Bratislava – is returned for the non-playing staff member who had replaced his self-isolating colleague on the trip. Both he and Josh Cullen – who had been called up to the squad late – were required to undergo a test in Slovakia, as per Uefa protocols.

In talks with the HSE, the FAI identifies four other members of the travelling party as close contacts of the staff member. Two of those contacts were Aaron Connolly and Adam Idah who were sitting within 2m of the staff member on the flight to Slovakia. The two players had sat away from the rest of the players, not in their assigned seats, but had not been told to move.

The FAI appeals to the HSE to see if Connolly and Idah would be allowed to play on Thursday night but the appeal is rejected. Shortly before kick-off the Ireland team is released without Connolly or Idah in the starting lineup. Shortly after that the FAI release a statement saying that second non-playing staff member had tested positive for the virus.

The statement is quickly followed by reports that Connolly and Idah are not in the starting lineup or on the bench because they are self-isolating. The FAI say that, after discussions with the players’ clubs, they are keeping the identities of the confirmed case and close contacts private while Kenny does not go into detail in his pre-match interview.

Ireland lose on penalties to Slovakia, ending hopes of Euro 2020 qualification. In his post-match interview Kenny confirms that Idah and Connolly missed out because they were close contacts of the second positive Covid-19 test. The manager confirms that the FAI appealed to the HSE on the basis that the players had been 1.9m and 1.7m away from the staff member on the plane but HSE protocols clarify that anyone within 2m of an infected person for more than two hours is deemed a close contact.

The Irish travelling party lands back in Dublin and all are tested again for Covid-19 that evening.

On Friday afternoon Connolly and Idah return separately to their clubs in England while, on Friday evening, the FAI staff member who tested positive in Bratislava and the other two close contacts from the non-playing staff return to Dublin on a private plane.

In his press conference on Saturday afternoon Kenny declines to go into any further detail about the situation with Connolly and Idah but confirms that they have returned to their clubs.

Late on Saturday night, the results of Friday’s round of tests are returned with one player testing positive.

News breaks in the morning that an Ireland player has tested positive for Covid-19 and that he and four other players are out of the Wales match. The FAI confirms later in the morning that five players are out of action but the statement does not name anyone. The FAI makes it clear that the player’s positive test is not related in any way to that of the backroom team member who tested positive on Monday last.

The statement goes on to say that the staff member who tested positive in Bratislava – who Connolly and Idah were deemed to be close contacts of - may have received a false positive result. The statement says that the staff member has subsequently been tested twice for the virus and neither result has shown any traces of Covid-19. The FAI say they will “discuss the issue with Uefa”.

Before the match against Wales, FAI CEO Gary Owens confirms that the four players who were confirmed as close contacts had been sitting within two metres of the infected player on the plane back from Bratislava.