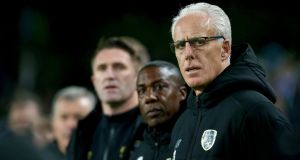 Mick McCarthy’s second tenure in charge of the Republic of Ireland has come to a premature end. Photograph: Tommy Dickson/Inpho

Almost exactly a year on from the appearance at the Oireachtas Sports Committee that really signalled the beginning of the end for John Delaney, it seems somehow stupid to be shocked again by the man’s profligacy while at the FAI. What other reaction would be reasonable, though, to the financial fallout from the managerial succession stakes he engineered towards the end of 2018.

The decision by the association’s current leadership to address the management issue quickly after it became apparent that Euro 2020 play-offs were to be moved beyond the July 31st conclusion of Mick McCarthy’s contract has been widely welcomed. Yet the cost attached is another blow to an organisation that only avoided financial collapse in recent months due to an influx of public money and a very substantial new line in credit from its bank.

As Gary Owens has said, the early action was in everybody’s interests. But the association’s interim chief executive was surprisingly upbeat in his radio interview on Sunday about the fact that even after settling up with McCarthy for around €1.5 million, there is the prospect of having to pay him another €1 million in the event that the team actually goes on to qualify for next year’s European Championships.

“We will honour Mick’s contract,” he said, “but if we qualify for the Euros we won’t really have a financial problem because it’s actually quite lucrative for us to qualify and I’d be happy to pay all the bonuses that people would deserve if we get there, bearing in mind Mick got us to the play-offs.”

After all those years in which Delaney spoke as though he was the association, Owens should perhaps choose his words more carefully. Setting aside the apparent presumption that he will still be in place more than a year down the line despite the general expectation that there might be some sort of process to fill the role on a longer term basis, and the suggestion that he personally would be happy to pay the bonuses, his tone seemed odd.

Perhaps like everything else, the figure has changed but last year the association estimated that qualifying for the European Championships would be worth around €5 million to it. McCarthy’s bonus represents a fifth of that, hardly chump change in the circumstances.

McCarthy might well believe that he would have earned the money himself if he had got to oversee the play-offs as originally anticipated, but he did not. Nor did he actually, as Owens explicitly suggested in a radio interview at the weekend, play any part in getting the team to within those two games of the finals. That is entirely down to the structure of the Nations League, a competition so convoluted that even failing to win a game and finishing bottom of your group can still earn you a significant prize.

The outgoing manager has obviously been deprived of that second crack at achieving qualification himself by the current crisis and its impact on the Euros, something nobody could have anticipated when his contract was being agreed. It is on that basis that there had been speculation some sort of accommodation might be devised so as to see out Ireland’s involvement in the tournament even though his contract would have expired.

There appears to have been some brief consideration given to offering him the opportunity to oversee the play-offs if they had been rescheduled for September. But when that started to seem unlikely the only real option to going with the dates as they stood would have been a really dramatic one: give him another campaign.

Oddly, that might actually have worked out well in the long run for Stephen Kenny, who would have had the opportunity to continue working with what looks to be a really good group of Under-21s then kick off his tenure with a qualifying campaign for a European Championship rather than a World Cup. A much more promising scenario given the number of places on offer.

He would be doing it too at a time when those Under-21 players would have another two years and hopefully a lot more clubs games under their belts.

Sticking with McCarthy, though, would have cost the FAI even more money and his team’s results in the recent group games didn’t exactly amount to a compelling case. Kenny, meanwhile, would naturally resist any attempt to vary a deal that might then evaporate for some other reason further down the road. Ultimately, the idea was never seriously considered.

So, if the team gets there now, it is going to be down to Kenny but it is hard to imagine that anyone would make a case for giving him an extra €1 million. Owens, though, does not seem to have felt it was appropriate even to try to negotiate the figure down with McCarthy when the pair spoke by phone on Friday.

He has little alternative, it seems, but to seek an accommodation with Robbie Keane who is understood to be due more than €500,000 over the two and a half years remaining on his contract, a deal apparently given to him by Delaney before any consultation with either of the two senior managers he was supposed to work with.

How wonderful it would be in the circumstances if both men simply walked away from those entitlements, and it is hard to imagine either actually needs the money nearly as much as the association does. This being football, though, and contracts being contracts, nobody expects that to happen.

It is hard to imagine what Delaney was thinking of, though. Other than himself, of course.