Another meeting between league representatives and PFA ended without resolution 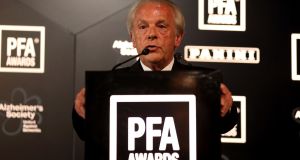 The chief executive of the Professional Footballers’ Association, Gordon Taylor, has said he will not take a cut to his £2m salary, as the continuing dispute over footballers’ wages appeared still some distance from being resolved.

Despite continued pressure from politicians, another meeting between league representatives and the PFA ended without any resolution on Monday, with both sides now looking to individual clubs to secure agreement with their players.

As Manchester United announced they would not use the government’s furlough system and Liverpool reversed their decision to do so, each club is increasingly taking their own route, with some adopting a wait-and-see approach until it is clear how the season, currently suspended, might end.

This goes contrary to the hopes of the Premier League, which suggested all clubs consider a reduction of up to 30 per cent in their players’ wages after an extraordinary shareholders’ meeting last Friday. But it is closer to the approach advised by the PFA, which asked that clubs should reveal their financial situation before players consider a pay cut.

Speaking to the Guardian, Taylor said: “What [the players] are saying is that it needs every club in its own locality to work things out for themselves – you can’t have one suit fitting all sizes because there is such a variance in income and expenditure.

“It needs to be round the table with all the facts revealed and then I can assure you that players will come to a position that is mindful about keeping their club alive and in good health as well as their jobs alive.”

Asked if he would take a pay cut, Taylor said: “The PFA will make donations and the PFA is involved in the players’ charity. At the moment the PFA position is that we will continue to be paying all our staff of over 60 in full.”

As clubs continue to formulate their own plans in response to the coronavirus crisis, Manchester United have written to their staff to confirm that all of their circa 900 full-time employees are to be paid as normal and that no one will be furloughed. Staff who are unable to work from home or have reduced hours have instead been encouraged to volunteer with the NHS or in their local communities.

Burnley also confirmed they would not be furloughing staff or cutting wages, despite the prospect – according to their chairman, Mike Garlick – of a possible £50m hole in club revenues. Elsewhere, David Moyes announced he would take a 30 per cent cut in his wages at West Ham, becoming the third Premier League manager to do so after Bournemouth’s Eddie Howe and Graham Potter of Brighton.

The prospect of a financially straitened future for all Premier League clubs continued to move closer, however, with the news that the online broadcaster DAZN, which holds the rights to stream matches in Brazil, Canada, Japan and Spain, had begun negotiations to suspend payments.

DAZN said: “We don’t discuss commercial conversations but we are, of course, in the process of working closely with partners to reach reasonable solutions given the unprecedented circumstances.” – Guardian